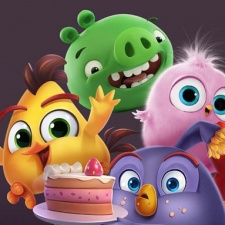 Angry Birds developer Roviohas revealed that it has surpassed over five billion downloads across its mobile games portfolio since it started publishing mobile games in 2009.

Founded in 2003, the Finnish company launched the original Angry Birds title six years later. It was one of the first mobile games to reach one billion downloads – which it arrived at in 2012 – and now Rovio’s games have accumulatively reached five billion.

While the majority of the studio's titles are part of its Angry Birds franchise, Rovio has also developed a number of other games, including Darkfire Heroes and Battle Bay, as well as games based on established IP, such as the now defunct The Croods and an upcoming Moomin game which is currently in soft launch.

From Finland to the ISS

"We’re lucky enough that our games have been enjoyed by people in almost every territory in the world, and at least one international space station," said the firm in a blog post.

"The fans are the reason we do this, and we are going to keep making the games that you love to play."

Despite being one of the early pioneers of mobile gaming, Rovio shows no sign of slowing down and recently reported annual revenues of $326.6 million for 2021, an increase of 5.1 per cent. The firm has also recently expanded its horizons with the establishment of a new mobile game studio in Toronto, Canada

The latest game in the Angry Birds series, Angry Birds Journey, launched in January this year as the franchise’s first title to use the slingshot puzzle game genre in seven years. We spoke with Rovio’s senior producer Tommi Koivisto and lead designer Sandro Kvlividze about the different challenges in making a successful mobile game in 2009 compared to 2022.

More recently, Rovio CEO Alex Pelletier-Normand spoke with us about Rovio’s approach to blockchain technology, which it calls by a different name.