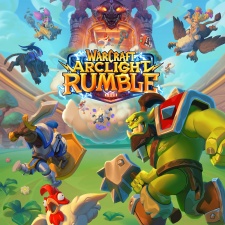 Back in February 2022, Activision Blizzard discreetly revealed its first mobile announcement since Diablo Immortal in its 2021 financial report. Arclight Rumble pairs RTS with autochess mechanics in PvP and PvE battles, with five factions and over 60 characters from the Warcraft franchise to collect.

Jeremy Collins, Warcraft Arclight Rumble art director, told PocketGamer.biz: “We looked at the core of Warcraft, and the DNA of Arclight Rumble starts and ends with the franchise’s RTS games.”

Making the most of Warcraft and Hearthstone’s heritage

Collins and Lim were keen to emphasise the significance of the existing Warcraft player base – one that is traditionally not mobile-centric.

Lim added: “We wanted to explore our take on what it means for Warcraft to exist on mobile, and how that changes your experience and tactility of playing strategy games. But we also wanted to put our spin on the defining moments of World of Warcraft – when you would embark on 20- or 40-man raids.”

Collins stated: “With Arclight Rumble’s gameplay, it makes sense that mobile is the platform. This is an opportunity for people to have Warcraft in their pocket.”

Noteworthily, Warcraft Arclight Rumble is confirmed to have just one currency, and will not restrict access to in-game content with premium currencies or timed events.

Collins stated: “We’re trying to keep monetisation pretty open during the beta, and experiment with many things, and with fairness one of our tentpost pillars, we decided to have only one currency in the game.

“It’s purchasable and acquired through playing the game itself, and we’re not including any randomisation: players will know that what they buying is what they’ll get. We felt this was the strongest way for us to make sure it was a fun and fair experience for everybody.”

Blizzard is no stranger to mobile, having for a time cornered the CCG market with Hearthstone and the soon-to-be-released Diablo Immortal, developed in partnership with NetEase. As recently revealed in Activision Blizzard’s Q1 2022 financial report, repeated strong performance from King has been propping up poor console and PC results from Activision and Blizzard throughout 2021 and Q1 2022.

However, although Collins and Lim confirmed that King is not directly involved in the development of Arclight Rumble, Collins stated the team leveraged their expertise – “We would be foolish not to leverage all of the knowledge and experience King has in mobile games!” – but did not go into details as to what elements King were able to influence. He continued: “Everybody making the game is a Blizzard employee.”

Arclight Rumble’s most immediate contemporary is undoubtedly Supercell’s Clash Mini, which also places a cast of recognisable characters as animated toys. However, Collins was keen to distance Arclight Rumble from any immediate inspiration: “We love mobile games. Our entire team games and researches mobile games. But there isn’t one key inspiration to the game.”

Warcraft Arclight Rumble will be available on iOS and Google Play, and will enter closed beta in the future within specific regions. You can find more about how Arclight Rumble reached its the figurine miniatures art style, and moving forwards with monetisation and in-game currency strategy by looking backwards.