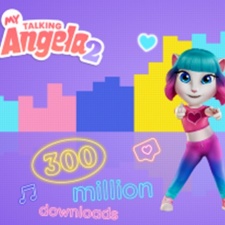 The global mobile title My Talking Angela 2, released by Outfit7 one year ago, has surpassed 300 million downloads as of its first anniversary.

Having spent a time at the top of the download charts in the summer of 2021, My Talking Angela 2 is now celebrating its first anniversary with an update and a song release celebrating the landmark.

A celebration in song

"It’s been amazing to see people all around the world playing My Talking Angela 2, watching Angela’s music video on YouTube, listening to the song on Spotify, dancing with her on TikTok, and more," said Outfit7 head of research and development, and VP of design and animation, Helder Lopes

"We’ve been getting so much excitement and fan-made videos from the fans since the launch, so we wanted to do something special for them on the game’s first anniversary with the song, music video, and game update – but it’s the fans themselves who’ve made the events of this summer really extraordinary!"