The London-based mobile games developer aimes to capture the imagination of the Supercell player community with Boom Beach: Frontlines 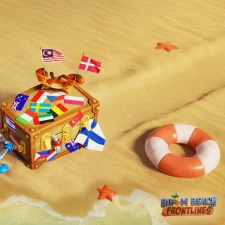 Mobile games developer and publisher Space Ape Games' Boom Beach: Frontlines is now available in soft launch in 19 countries. The 9v9 team shooter game has been downloaded by more than 1.3 million players in the first 10 days of its soft launch.

Boom Beach: Frontlines, the sequel to the hit Supercell game, is the first game based on a Supercell IP that has been developed and published by a Supercell-invested developer.

After a further $37 million investment, Supercell, the developers of Clash of Clans, Clash Royale, and Boom Beach, owns a majority of Space Ape Games. The firm aimed to capture the imagination of the Supercell player community with Boom Beach: Frontlines.

Around 50 thousand players from the community joined the game’s Discord server during alpha testing.

Boom Beach: Frontlines is not the only game by Space Ape Games making headlines. The mobile game developer collaborated with rapper Eminem in one of its titles Beatstar.

Space Ape Games COO Simon Hade spoke on the collaboration. Hade said, "Beatstar has committed to being a music discovery platform for its players."

"One of the ways it does this is by delivering brand new music to players on the day of global release, from artists like Camila Cabello & Ed Sheeran, The Chainsmokers, The Black Eyed Peas, Charlie Puth & BTS.

Last year, Supercell was listed as one of our top fifty mobile game makers of 2021.