A deep dive into CrazyLabs transparency

CrazyLabs explains how developers and publishers can use data to inform and optimise every stage of hypercasual game design, development and live operations. 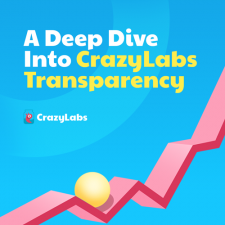 The foundation of hypercasual game development is game data, data, and more data.

From testing your very first creatives, all the way to full launch, transparency equips you with fast, reliable information on how to improve and scale your game - ultimately saving you an enormous amount of time and effort. This is why working with a publisher whose top priority is always 100 percent transparency is non-negotiable.

CrazyLabs’ CLIK Dashboard is your tool for complete transparency. Below, we dive into our incredibly comprehensive tool with the industry-leading, highest level of transparency across each of the game development testing stages.

The CLIK Dashboard enables you to run various cost per install (CPI) tests to check the marketability strength of a game idea. We run incredibly granular tests, focusing on both iOS and Android operating systems while testing on Facebook and TikTok per creative. In some cases, we also run CPI tests on one of the software development kit (SDK)_ networks, in order to have stronger validation of its marketability strength and to ensure that we're not dropping a game with potential.

Additionally, although our highest priority in the initial stage of testing is CPI, we will always also test Day one and playtime. We do this to make sure that we’re not dropping any games with potential (i.e., games with high CPI and high retention or playtime).

From this crucial data, you can get a deep understanding of what needs to be improved. For example, low CVR can imply a poor storefront, whereas low CTR is a reflection of an unsuccessful video creative that requires improvement.

Once the creative video achieves a low CPI, it’s time to focus your attention on building out the initial version of the game, where every level provides different content. We recommend developing a minimum of 30 minutes (depending on the type of subgenre) of original gameplay at this stage.

In the retention stage, we’re testing whether players enjoy playing the game's various levels so much that they come back the following day to continue playing.

CLIK SDK Data: How you can improve retention by knowing what your game needs

In order for us to gather as much data as possible on your games so that we can understand how players are behaving in your game, we provide you with our proprietary CLIK SDK technology for you to integrate into your game.

The CLIK SDK is incredibly easy to implement and get started with, providing you with granular data all in one place. The CLIK SDK is a crucial element in transparency since this allows you to understand things like:

As the CLIK SDK allows you to see everything that’s happening in your game in one place, this makes your life much easier when trying to improve your game’s KPIs and overall performance.

After you’ve reached solid CPI and retention key performance indicators (KPIs) (i.e., day one day three, day seven, and 24-hour playtime), you can start monetising the game by placing ads inside and testing their performance on different networks. This is called the average revenue per user (ARPU) stage.

Through the CLIK SDK, you can optimise the ad locations, ultimately improving ARPU. To do this, you need to dive into your game’s below data and make informed changes:

Through this data, you can understand key things like how long the cool down between ads should be, which rewarded video (RV) is performing best and at which level, and how aggressive our ad approach should be. All of this will help make your game become as profitable as possible.

CrazyLabs believes in being 100 percent transparent about the revenue developers are bringing in from their games. This is why the CLIK Dashboard shows every developer the breakdown of what they’re earning, as transparently as possible;

To maintain a game’s profitability, and even increase it, we continue conducting many A/B tests on many groups to ultimately see which level funnel, metagame, storefront, monetisation strategy, feature and tons of other elements are performing best.

On the CLIK Dashboard, you’ll be able to see all of this data. Additionally, our developers meet with our LiveOps team on a regular basis to examine all of this data to further optimise your game.

Creative optimisation is a never-ending process

Testing and optimising the creatives is what lets you market your game in the best way possible; you’ll discover this by learning which ads or creatives perform better, and which one is driving the most traffic and revenue. In terms of transparency, the CLIK Dashboard shows you the best-performing creatives per type (video, static banner, end card, and playable creatives).

Build your future with CrazyLabs

Transparent data is what reveals how you can optimise your game, and what worked or didn’t work in your previous games. Every element of transparency you obtain in each game publishing process also pays it forward for next time. In other words, the greater your data, the greater your chances for ongoing success in your future games.

Another important part of data transparency is your learning curve. As a developer, when you can regularly access transparent data and gather actionable insights, you can become a better developer faster and thereby create more successful games.