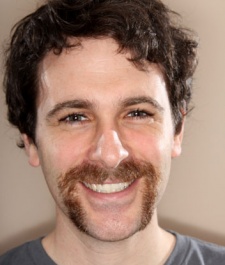 Australian developer Halfbrick has built its reputation on a series of deep yet casual paid games such as Fruit Ninja and Jetpack Joyride.

Its latest variation on a theme is Colossatron: Massive World Threat, which sees you take control - at least sort of take control - of a large destructive robot worm which you extend by organising its coloured attack units in a bubble-popper match-3 manner.

We spoke to designer/artist Matthew Knights about the genesis and development of the title, as well as the decision to release it as a paid 99c game with in-app purchases.

Pocket Gamer: What was the inspiration behind Colossatron?

Matthew Knights: It's an unconventional game for sure. One of our guys had the idea of a big segmented snake monster with lots of weapons that you could mix and match. He's a big Transformers fan, and the theme of 80s Saturday morning cartoons was something that we all enjoyed and took inspiration from during development.

Gameplay-wise it appears to be a mash-up between a match-3 marble-popper and an action game like Killer Worm?

That's quite close. Another apt description as a mobile tower offence game with matching elements. We pride ourselves on making unique games and I think Colossatron is no exception.

Not giving the player control over the Colossatron's movement seems to be a counter-intutive decision for an action game. Why did you take it?

We tried giving players control of Colossatron, and you still can control it to some extent now using the Snake Strike gadget, but it detracted from the core idea of the game, which is to build and maintain Colossatron and a mobile base of destruction.

There's also quite a lot of action as the game ramps up and some pretty deep strategy to consider, so controlling Colossatron at the same time was just too much to think about.

It's less an "action" game as that conveys direct control over combat, but more a mobile strategy game with constant action as a direct result of your decisions.

How did you look to keep the player engaged in the battles?

There's a lot of options in terms of what weapons you're trying to build and where on Colossatron they will be most effective. Also, combining Powercores just before they explode and focus firing down tough enemies keeps the action pretty heated.

Top players will juggle several Powercores outside of Colossatron and wait for the perfect time to add them. Objectives change, weapons change, enemies are unpredictable. Everything lends itself to each session being pretty unique.

Colossatron looks like the sort of game that went through a lot of iterative playtesting. Was that the case, and what were the significant areas you changed during development?

Initially, Colossatron was mostly just a high score chase and leaderboard-centric game. During playtesting, we received a lot of feedback that many players wanted to feel a sense of progression and completion so we added the campaign where you destroy the world.

It ended up reinforcing the title and adding a lot to the game in terms of character and opportunities to deliver the player an extra few chuckles too.

Unlike games such as Jetpack Joyride and Fish out of Water, you don't have an obviously friendly lead character. Do you think that's an issue for players?

We're definitely aware that the theme and central character would not be as appealing to more casual and mainstream players than Jetpack and Fish. But we're okay with that - building a diverse fan base and a portfolio of unique games is definitely our jam.

It's cool that you get to be the bad guy in this one, and the wacky news team that covers the action helps to complement that.

Despite looking like an action game, most of the 'interesting decisions' in Colossatron's involve the choice of gadgets or weapons, the inter-level editing and the match-3 gameplay. Do you think this might be a little subtle for a younger/male audience that's more attracted to the Massive World Threat part of the game?

If you want to top the leaderboards, then yes, strategy is super important, but I think any kid can have a blast throwing their favourite weapons into Colossatron and watch the military explode all around him or her.

We have identified that it takes players a little longer than desired to fully understand how to play, and we plan on helping them out with improved tutorials and accessibility in a coming update.

The game took a little over a year to make; that's with around six or seven main guys working on it, but we had lots of people in the company touch the game in some way or another.

We used our own engine called Mortar, and a few-in house game editor tools. We used a fairly powerful in-house UI editor to do all the menus, which were quite complex with the newsroom theme.

Why did you decide to go with paid-with-IAP model?

Good question. If you ask game developers about monetising games, everyone has a different opinion. There were arguments for paid, freemium, and paid with IAP even within the few people developing the game, not to mention those external to it.

In the end it came down to the kind of game it was, and where we felt the market was at the time. We're not at all opposed to releasing games free (eg. Band Stars), but even when we released Jetpack Joyride 2 and a half years ago it was paid with IAP.

We've had a lot of good response from the community who are fine with optional IAP in a paid game.

The game's IAP model is fairly light-touch, being more focused on use of the soft currency (Cash) than hard currency (Prisms), with Prisms mainly used for infinite weapon unlocks and level restarts. Do you not worry that you're not monetising your audience as strongly as other games?

It's always a concern and a fine line to walk. There are gamers who will always feel that IAP is bad no matter how it is handled.

In Colossatron we see IAP as optional for players so there's nothing that can't be earned through normal gameplay. And there's no pay-to-win on the Colossatron leaderboards: paying and non-paying players have to compete on skill alone.

I think if you try to monetise too hard you end up losing players, especially if you use obvious tricks that frustrate players like pay walls. We'd rather have more players that like to spend on the game because they enjoy doing so and find value there.

Did you learn anything surprising during the soft launch?

We relied mainly on feedback from external playtesters during development and didn't conduct an official soft launch.

But we had so many internal reviews and tests we were happy to go out with the current product, which we will definitely be iterating on over time.

What elements of Colossatron are you most happy with?

We're pushing the hardware pretty hard to get all of those units on-screen at once along with all of the visual mayhem and destruction.

This is also Halfbrick's first title with voice-over work so we're pretty pleased about that!

The game's only been out for a month or so, but what's your view on the initial market reaction?

Sales have been good, but the US hasn't embraced the game as much as we initially expected. However, we're doing very well in Asia; especially South Korea  they love it there!

It's also been great seeing people comparing strategies and competing for high scores. We were deliberately vague on top tier strategies to hopefully see communities forming around this exact type of discussion.

Can you talk about your plans in terms of future updates?

You definitely haven't seen all of Colossatron's arsenal yet. We have more weapons that are yet to be revealed, and a lot of ideas for coming updates.

We're certainly not done with Colossatron. It will be a major focus for us as a studio in 2014, both as a product and for learning how to best operate such a unique and unconventional game!

Report: Fruit Ninja developer Halfbrick lays off half its team Reply
James Schultz
Hi Jon! The person interviewed for this piece was actually artist/designer Matthew Knights. He's the handsome lad with the epic mo. Thanks heaps!
Posted 6 years, 6 months ago