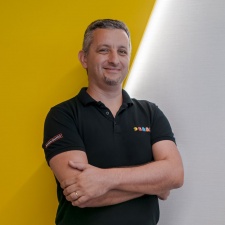 Bandai Namco is one of the biggest names in the gaming industry. The Japanese developer is responsible for acclaimed franchises such as Dark Souls, Tekken, and Xenosaga, as well as bringing popular anime such as Naruto and Dragon Ball to gaming.

The company has also made a significant footprint in mobile gaming, including being listed in our list of 2021’s top 50 mobile game makers. We spoke to Bandai Namco Mobile’s CPO Massimo Caporale about the mobile industry’s evolutions, its future and what he’d like to see in mobile gaming.

Hi, my name is Massimo Caporale and I am the Chief Publishing Officer at Bandai Namco Mobile, Bandai Namco’s mobile gaming HQ in the West. My role is to oversee the company publishing and product strategy and to support and coordinate the activities of the development, publishing and marketing teams we have in our amazing beachside office here in sunny Barcelona.

Well, I joined the mobile gaming industry back in 2004 straight out of university, working on J2ME games where the Nokia 7210 was the reference device. Looking back, you could hardly call those “games”, but it was just the beginning of an industry set to take the world by storm, revolutionise our lives and bring gaming to a much wider audience.

Clearly for me the biggest change in the industry happened when Apple entered and completely disrupted the mobile gaming market by introducing the first multi-touch smartphone and, soon after, the App Store. This greatly opened up the kind of games that could be developed for mobile phones, as well as removing many of the barriers between developers and players and throwing out of the window the status quo of mobile games distribution. That was the beginning of a new era for mobile gaming.

Did you see the above-mentioned change coming? If not, how did you adapt to it?

To be honest no, I did not see that coming. I don’t think many did, judging by how long it took established publishers to react and adapt to it. When the scale of the change became apparent, I pushed the publisher I was working for at the time to invest into the new technology, and we made first moves into making iPhone games. However, the focus and setup of the company, (like many other publishers back then) was centred around carrier distribution and pivoting to direct distribution through first-party stores proved quite challenging, especially in terms of user acquisition and, therefore, monetisation. Sadly, that company never managed to successfully pivot, and I eventually moved to a different company more focussed on smartphone technology.

Roughly 3 years ago we opened our beachside office here in Barcelona, and since then we have kept slowly and carefully growing our teams, selecting the best talent the industry has to offer. When setting up BNM, we have also made the conscious choice to create our own innovative culture; a culture that would foster innovation, attract the best talent and empower them to do their best work. In short, we wanted to build the company that we always wanted to work in. However, setting up a new studio, in a new country, with a completely new culture and in an extremely competitive market is no easy feat. Lots of research needed, lots of trial and error and lots of learning, but also a lot of satisfaction in seeing the talented team that we have gathered here, and in sharing part of the invigorating energy that goes around the studio nowadays.

When setting up BNM, we have also made the conscious choice to create our own innovative culture; a culture that would foster innovation, attract the best talent and empower them to do their best work.

What I have observed in recent years is a move towards hybrid monetisation, where games are not only monetised through ads, IAPs, or subscriptions, but rather a mix of the above that allows players with different spending patterns to find something to spend on, delivering more value to both players and developers alike. Clearly, this adds a lot of complexity to the monetisation design, and one of the things we had to learn the hard way is that it really pays to have a hybrid monetisation design in mind from the beginning of a project rather than as an afterthought.

Mobile gaming is one of the fastest growing industries and has been so for many years. I cannot see this trend stopping anytime soon. As such, it will keep attracting a lot of investments, and will see many big players such as Netflix and Sony trying to keep buying their way to the top. Game quality (and players expectations) will come closer and closer to AAA and the barriers between mobile and console will get thinner and thinner. Ultimately mobile is set to become the gaming platform of reference, until we will all be playing in the metaverse (some good years down the line).

The barriers between mobile and console will get thinner and thinner.

When I enrolled atin the Edinburgh University to study Artificial Intelligence (many moons ago), it was because I was convinced that AI would eventually play a central role in video gaming. The advent of smartphones and fast connectivity meant that the focus in the past decades has been more on connecting real players rather than really advancing AI technology in gaming (despite the many advances that have indeed been made in the field). However, I still feel excited by the possibilities that advanced AI could mean in the world of gaming, and I believe that down the line, when we will be able to create persistent worlds in the metaverse, we will see the need, as an industry, to invest in implementing advance AI techniques in gaming in order to make these worlds truly come alive.