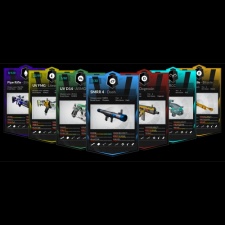 The partnership will see weapons and other items from Reality Clash available on Nagemon's virtual gacha terminals. Each randomly-won item will be tokenized on the blockchain as a non-fungible token (NFT).

Bringing gacha to Reality Clash means it can improve its reach to players in Japan and the rest of the world, where gacha mechanics are particularly popular.

"We are tremendously excited to be working with Nagemon's Gacha to deepen the Reality Clash experience for players in Japan," said Morten Rongaard, Co-Founder of Reality Gaming Group.

"As we know, the mobile game scene in Japan is especially vibrant, which means new game mechanics being offered up by the blockchain have been fully embraced locally. This is just the start of our entry into the exciting Japanese games market. We can't wait to release more cool content for Gacha players over the coming months!"

Back in October 2019, Reality Gaming Group announced that it was looking to raise $1.5 million in funding to explore further game development. Investors could participate in traditional equity funding or via a security token offering, which would be registered on the blockchain.