"The timeliness of this partnership and this message feels so right" 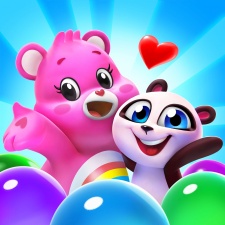 The Los Angeles-based developer will create a Unity Bear, which makes its debut appearance in its popular mobile game, which has accumulated 140 million downloads. With the motto "Together, we are stronger", the new character will make its appearance on September 3rd.

For the first six days of release, Unity Bear will encourage users to partake in acts of kindness, not just in-game but in real life as well. As of August 4th, the Care Bears will be featured in Panda Pop for the next two months.

"The timeliness of this partnership and this message feels so right. Now more than ever is when we should embrace the revered Care Bears brand that has instilled a sense of compassion and kindness in so many of us for nearly 40 years -- a message that has been passed down from generation to generation," said Jam City senior vice president for publishing and product marketing Vanessa Rouhani.

"Jam City works to embody much of what Care Bears represent. We want to encourage kindness and to enrich the lives of our community while embracing our differences and uniting for good. We are humbled and thrilled to be a part of the relaunch of such a cherished brand."

Earlier this year, Jam City launched Disney Emoji Blitz in Japan after the game had racked up 30 million downloads worldwide.