Available from May 20th to June 18th 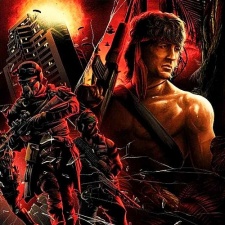 Activision has confirmed that 80s action stars John James Rambo and John McClane from the world of Die Hard will be added to the game in a new licensing deal.

A limited-time multiplayer mode known as Guns Blazing will exclusively arrive to the mobile version of the shooter.

During the two-week event (starting May 20th), players will be able to transform into Rambo and McClane in this new mode, where they can dual-wield Death Machine weapons to take out enemies.

Anyone wanting to permanently access skins for the characters - made famous by Bruce Willis and Slyvester Stallone -  can do so by purchasing specific Die Hard and Rambo bundles via the in-game store.

Welcome to the party, pal

"One is John McClane, a New York cop who arrives at a holiday party turned hostage situation. He’s the hero of the Die Hard films, one of the most iconic action movie series of all time. The other is Rambo, a man double-crossed while on a clandestine mission and left to fight on his own in Rambo: First Blood Part II, which continued to inspire countless action movies since its release in 1985.

"With these two ’80s Action Heroes appearing across all three games, anything is possible in Call of Duty…"

After launching in China earlier this year, Call of Duty: Mobile went on to generate $14 million within its first week.

Since launching in October 2019, the game has reached 500 million downloads, as well as over $1 billion in revenue.