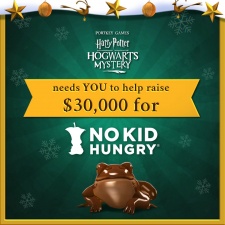 Jam City has partnered with children’s charity No Kid Hungry for an in-game event in Harry Potter: Hogwarts Mystery.

No Kid Hungry is a non-profit campaign that is working towards tackling child poverty and hunger in the US.

Players of Harry Potter: Hogwarts Mystery in the US will be able to participate in the Chocolate Frogs in-game event and be awarded in-game items and currencies.

As players complete daily community goals they will collectively unlock charitable donations to No Kid Hungry on behalf of Jam City.

These aren't real frogs are they?

The Chocolate Frog hunt event will run from December 6th to December 10th. You can find out more about the No Kid Hungry campaign at its official website here.

Harry Potter: Hogwarts Mystery is free-to-play with optional in-app purchases and is available to download on the App Store and Google Play.

To date, Hogwarts Mystery has accumulated 80 million downloads across the App Store and Google Play.

Recently, Battle of Polytopia developers Midjiwan revealed that it has invested $185,000 from in-app purchases to support solar electricity projects in Africa.