Homa Games is building on Sorare's blockchain infrastructure to give life to legends like Cruyff and Platini in mobile games. Registration is now open. 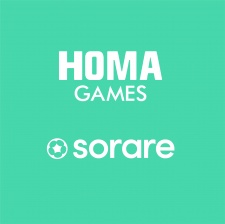 Homa Games will host a game jam in February 2022 dedicated to Sorare’s collectable Legend Cards and the goal of bringing non-fungible tokens (NFTs) closer to the mobile gaming world, in what will be the fourth edition of the HOMAJAM series.

NFTs have boomed in the last year but remain a relatively unexplored category in mobile games.

In 2021, both Homa Games and Sorare experienced incredible growth and established themselves as leaders in the gaming industry. In September, Sorare raised the biggest Series B funding round in Europe to date, $680 million at a $4.3 billion valuation.

Last year alone, the company surpassed $250 million worth of cards traded on the platform and more than $100 million in net revenue. Also founded in 2018, in 2021 Homa Games raised $65 million and passed the 500 million downloads mark with its extensive catalogue of mobile games.

In September, Sorare raised the biggest Series B funding round in Europe to date, $680 million at a $4.3 billion valuation

NFTs – cryptographically unique tokens that are linked to digital content that includes proof of ownership – are one of the fastest-growing sectors in the blockchain industry. They are used in many ways such as artwork, digital collectables, utilities, and items in video games. Leveraging this technology, Sorare is building a single product that combines football, NFTs, and gaming.

In Sorare’s platform, players can purchase NFT trading cards which represent football players and use them on a bi-weekly basis in a fantasy game. With 700,000 registered users, Sorare has been able to extensively grow its content by licensing more than 200 clubs at an incredible pace. Furthermore, their 50 new collectable Legend Cards feature unforgettable players like Maradona, Platini, and Cruyff representing historic seasons in the players’ careers.

Homa Games has become one of the world’s leading platforms for creating and publishing mobile games. Its technology works as a layer on top of cross-platform game engines like Unity, to help developers increase their production speed, their chance to build a hit game, and to remove the financial risk.

By accessing Homa Games’ platform HomaLab, mobile game developers are able to increase their efficiency with a full stack of tools such as market intelligence to scout new trends and ideas, real-time A/B testing capabilities through a no-code SDK, and distribution and monetisation technologies.

In this new edition, the partnership with Sorare will unlock the potential of NFTs in mobile games

Since its first event in September 2020, Homa Games has joined forces with industry players such as Nerf (Hasbro), Facebook Audience Network, and GameAnalytics for previous game jams.

In this new edition, the partnership with Sorare will unlock the potential of NFTs in mobile games. Jam participants will be able to use their collectable legend cards as characters of the games and will be challenged to find the most engaging way of doing so, for a chance to win unique packs of Sorare cards.

The game reaching the required metrics will earn the Grand Prix that consists of one unique, two super rare, four rare, and 20 limited cards (total value of all the cards package will exceed $7000), and will get access to attractive publishing opportunities with Homa Games.

Three other prizes are guaranteed for submissions presenting the best cost-per-install (CPI), playtime, and retention metrics, consisting in packs of one super rare, two rare, and 10 limited cards (total average value of each package will exceed $1500) for each winner. Additionally, each jam subscriber will receive a special gift.

As in previous HomaJams, Homa Games welcomes both novice and experienced game creators.

Daniel Nathan, CEO and co-founder of Homa Games, said: "Video games have been a fertile industry for tech innovation for decades now, and we believe that NFTs open new possibilities when it comes to gameplay, community building on mobile devices. Homa's mission is to serve the gaming developers, and by partnering with Sorare on NFTs adoption we're adding one other block to their toolkit."

The opening ceremony will be held on February 7 2022, and participants will have a month to develop their prototypes

Nicolas Julia, CEO and co-founder of Sorare, added: "The future of NFT gaming is mobile and is interoperable. We’re proud to explore this further with Homa Games' great community of mobile game creators to innovate in the mobile adoption of NFTs."

The opening ceremony will be held on February 7 2022, and participants will have a month to develop their prototypes and submit them on March 7 2022. Through the month, participants will have the chance to attend masterclasses from experts of the mobile and blockchain industry, have constant support, and will be provided access to exclusive developing resources and tools to leverage their game.