Supercell, InGameJob, and John Romaro among others 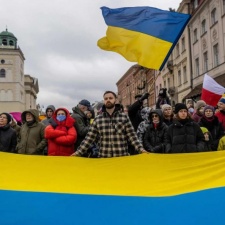 As support continues we will keep this page regularly updated to reflect the ongoing efforts of companies across the world and ways you can get support.

The funds raised will be split equally between the two charities, with the firm selecting charities that it believes will have long-lasting effects in the future. Necrosoft has stated that its reason for creating the bundle is due to its presence as an international company that includes team members and friends currently in Ukraine.

The bundle, which includes titles and games assets from over 730 creators has now launched.

InGameJob co-founder Tetiana Loktionova has created a support platform for studios and individuals in Ukraine leaving the country, so that developers can directly get in contact with willing companies.

The initiative is being led by Values Value, which matches companies with talent from the gaming and mobile industries. Games Gathering, DevGAMM, GDBAY and more in Ukraine are also leading the initiative.

Other companies currently involved include Nordisk Games, Redhill Games, Virtuos Games, and Orbital Knight, in addition to many others.

Companies based in the EU, America, Canada, Moldova, Romania and any other country that Ukrainians can reach are able to fill in this form if they wish to lend assistance in hiring developers, offering financial support, or providing legal or relocation advice.

Individuals who want to get involved in supporting Ukrainian developers, either with transportation, housing, legal advice, or financially, can fill in this form.

Galway-based Romero Games has added One Humanity, a new level for id Software’s Doom II created by John Romero, to its storefront to raise funds to support the humanitarian efforts of the Red Cross and the UN Central Emergency Response Fund in Ukraine.

One Humanity is the first Doom II level published since the release of the game in 1994 and is available for €5, with 100 per cent of the proceeds going towards the aforementioned initiatives.

You can purchase the game from this link.

Mobile games industry leader Supercell has announced that it is donating €1 million to the United Nations High Commissioner for Refugees (UNHCR) and has also pledged to match donations up to a further €1 million.

Supercell has stated that it does not ordinarily publicise its donation contributions but has done so to support the peace of Ukrainian citizens.

You can donate through this link.

In a post on LinkedIn, ad agency Appvertiser’s head of marketing Evelin Herrera has confirmed that the company will donate to a non-profit organisation to support relief efforts in Ukraine, with more details to be disclosed later this week.

Mobile games outfit Plarium has donated $500,000 to the Ukrainian Red Cross Society and has set up a support line to provide physical, logistic, and emotional support for its employees and their families.

The firm currently has over 700 employees based in Ukraine and is providing them with support across multiple locations, including providing shelter, supplies, food, and direct aid. Plarium has suggested that those that wish to help can donate to International Society of the Red Cross in Ukraine, Direct Relief, and Voices of Children.

The Pokémon Company International pitches in

The Pokémon Company International has contributed $200,000 to US non-profit GlobalGiving to support humanitarian relief in Ukraine.

The firm has said that the funds donated will be used to support community-led organisations support families and children that are affected by the conflict,

As a number of game developers flee Ukraine due to the Russian invasion, Ukrainian studios have been reaching out and asking for people to remain informed, engaged, and provide support where they are able to.