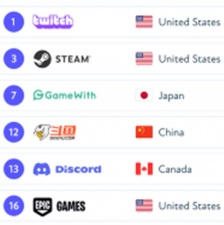 A new case study by localisation company Blend has been released, exploring the value of localising gaming brands and analysing SimilarWeb’s data report from July 2022.

Among the top gaming websites, many were found to come from English-speaking countries like the UK, Canada and the US, but a number did originate in other parts of the world such as China, Japan, Colombia and elsewhere.

According to SimilarWeb, of the top 50 gaming websites, 23 (48 per cent) have over four language options and 32 garner more than a fifth of their traffic from locations outside their country of origin. Based on this, Blend suggests that local games companies can grow globally but "need to consider various cultural and societal implications" of their titles, especially in the age of the internet and mobile games. Furthermore, in order to achieve multimarket success, the company considers localisation "non-negotiable".

Blend proposes that gamers should be engaged in their native tongue on websites especially, but also notes the importance of voice-over within games themselves. "Finding the right voice-over artists to suit character personas is important to give players a consistent experience in every language. Consider different voice-over artists for different countries," Blend says.

"Without localisation, companies risk making themselves inaccessible to millions of gamers worldwide."

Further data on the size of the global market and its active player base was also provided.

Earlier this year, TransPerfect head of global testing & QA Semih Altinay, whose expertise includes product localisation, spoke with us about standing out in the international mobile market.