Webzen explores new ventures with the release of its MU: Fairy Elf Figurine

Korean developer and publisher branches out to diversify its portfolio 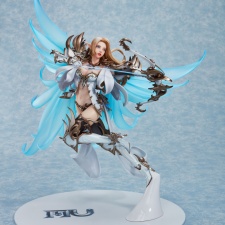 Korean publisher and developer Webzen continues to expand on its popular MU OnlineIP with its very first venture into the toy market.

In recent years, Webzen has established its intentions to diversify its portfolio and branch out into new avenues of merchandising for the MU franchise.

To date, this has resulted in a collaboration with the popular Japanese life-style brand Tokidoki, an art exhibition inspired by MU-lore, and most recently a partnership with veteran figurine manufacturer VERTEX to produce the very first line of MU figurines.

Starting from today, its Fairy Elf Figure is available for pre-order from AmiAmi, the largest Bishoujo & Character retail site for over 20 years in Japan, and retails for ¥29,800, with shipping available worldwide.

In VERTEX, Webzen has found a partner with a fantastic pedigree in the toy market. Renowned for the quality and imaginative designs of its Bishoujo sculptures, VERTEX uses state of the art 3D sculpting techniques to bring its figurines to life.

It's exactly these techniques that were used to create the Fairy Elf - MU's debut figurine. Its elegant design and gorgeous details certainly do the character justice and fans definitely won't be disappointed.

There's no argument then that Webzen has a great product in terms of quality, but will it be popular and is it all worthwhile? Well, we can certainly expect a long pre-order list for its fans in Asia where the MU Online games have consistently attained users in the hundreds of millions across China, Korea, Japan, Taiwan and Southeast Asia.

The interesting question is whether these new ventures will help enhance the franchise's popularity in the Western market.

Although it's nowhere near comparable to the size of its Asian fanbase, the franchise started to gain more recognition over the last four years thanks in large part to its mobile releases - MU Origin and MU Origin 2, with the former achieving a top seven spot in the US App Store.

More interesting still is to see what other avenues Webzen choose to explore, especially if it sees a growing dedicated fanbase in the West.

It certainly isn't beyond the realms of possibility to see an MU game series developed for the Korean market and there's no shortage of fans that would love to see it.

Ourpalm spends $170 million to become the largest shareholder in Webzen