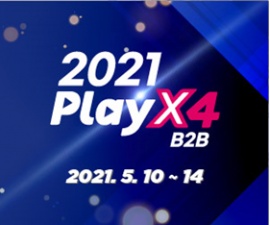 PlayX4 is an online business events for videogames companies, taking place from May 10th-14th 2021.

The event is aimed at videogames businesses of all kinds - developers, publishers, distributors, marketers, and more - with participants from across Korea, and worldwide confirmed to attend.

PlayX4 offers a complete programme of business development activities, all of which has been redesigned to maximise the opportunities for delegates and participants to meet, network and do business.

The business elements of the conference will be available for 24 hour per day across the entire conference, in order to overcome the time difference, while the programme content has expanded to reflect the rapid evolution of the global games market and the opportunities created by the ongoing global pandemic.

Key titles highlighted at PlayX4 include:

PlayX4 has been created by the South Korean province of Gyeonggi, and is hosted by the Gyeonggi Content Agency.

Warfare:Classic is a cross-platform (PC, web and HTML5) First Person Shooter (FPS) game, developed by Crossfire. The game started its first beta test (via Crazygames) in Feb 2021. The mobile game will be released in the second half of 2021. The game features 130 types of weapons, 23 character types, 27 maps and 7 play modes covering single and multi-player. Players can log into the game and experience the classic FPS gameplay, with real-time matching in HTML5 or mobile without having to install or download the game. (Click here to play).

The global COVID19 pandemic has closed theme parks and amusement venues around the world. Many people confined to home are looking for new ways to entertain themselves and new experiences to try. CILLBIG, a leading AR company has created Fanta Play, after requests from its theme park partners around the world. The game offers a variety of innovative and engaging augmented reality games which can be played at home. With four categories of game and 28 different experiences to try, Fanta Play aims to be one of the first AR games to hit living rooms worldwide.(CELLBIG).

Kusan : City Of Wolves is a hardcore top-down shooter inspired by Hotline Miami, with the tactical battles of the John Wick movies, all within an Asian Noir setting.Players can choose from a vast variety of deadly - and unlikely - weapons, from daggers and guns, to a prosthetic arm. The chaotic and dangerous atmosphere is completed with a soundtrack and sound design from Korea’s top Hip Hop producer Loptimist. (CIRCLEfromDOT)

Mobile puzzle action games are incredibly popular.Go PsyPuzzle taps into this popularity with a focus on fun, yet fiendish design across its numerous levels. Based upon the hit Korean animation 'Taste of Psychology', the game takes a light hearted look at a range of psychological challenges, which will tantalise and tease players perceptions. From relationship issues, to depression and bullying, Go PsyPuzzle offers a new way to think about thinking. (DuckGames).

Casino games remain one of the most popular genres of the mobile and casual gaming market. From simple card and dice games, through to major online casinos, players around the world love the feeling of competing. Holy Moly Casino Slot, brings a new dimension to the online casino craze, with a social angle, and focus on fun, multiplayer experiences - all within a bright, colourful environment. Players can compete, cooperate and communicate with others, as well as enjoying the classic casino experience. (Bepex).

Korean indie game developer had a hit at the previous PlayX4 event, with its popular Hum-V Dog game. Proving that indie games are where innovation and experimentation are at the heart of game design, the studio is back with its new title, Underground Station. Players have to explore mysterious, dark underground tunnel system to try and free the enslaved mole people. A simple, funny classic indie experience. (Guri's Game).

Nearly Dead is a procedurally-generated real-time survival RPG game for PC. While the graphical style is simple, cartoony and fun, don't be deceived, the game piles on challenge after challenge as levels progress. Players will have to adopt different strategies, hire new mercenaries, and try differnt unit combinations in order to survive the increasingly tough goals. Nearly dead has already picked up a loyal fanbase from its release on Itch.io. Nearly Dead will be released on Steam in the second half of 2021 (Mono Software Inc).

ReRoad is a tower defence game with a twist. The game has already found popularity with players through its release on Steam Early Access. Unlike the majority of Tower Defence games out there, ReRoad challenges players to plot their own route through the game. Towers are already placed across the map and players must play down the paths between them to optimise the oppotunities to exterminate enemies as they travel. With multiple upgrades and random inventions, every game of ReRoad offers something new and different. The full game is coming soon. (Rabbit Games).

Tap To Galaxy is a mobile SciFi RPG created by 2HK Soft which offers a unique and different random experience, with a randomised tap RPG system, which enables players to discover and collect exclusive items throughout the game's simple, engaging mechanic.  Tap to Galaxy was released on Google Play in April 2021. (2HK Soft).

Titan Chess is an auto-battling anddeck-building mixture genre card game. Players battle others in real-time, with a pre-built deck to collect units and form a team to beat their opponents. Download Titan Chess for Android. (Double Stroke).

Korea’s PlayX4 games event returns as a hybrid in 2022