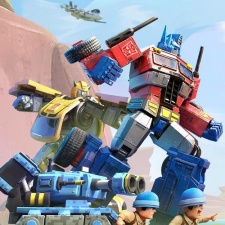 This collaboration was planned, brought about and managed by Yodo1, Hasbro’s trusted digital licensing partner, who also serves as the global game’s service platform, on behalf of star developer Rivergame.

Due to the active engagement from both gamers and Transformers fans, Top War broke its daily revenue record on the first day of the event launch, along with ramping up the numbers of the game’s rank in the App Store.

These amazing figures are strong evidence of the universal appeal of the Transformers brand and its ability to truly boost game monetisation and success at a global level!

To make this landmark event possible, Yodo1 worked around the clock to facilitate the whole process by working closely with Hasbro and Rivergame, including proposal preparation, character design, and material supervision to pre and post-marketing.

As Hasbro’s partner, Yodo1 continues to bring premium developers and high-quality games to the table, of which Rivergame is a prime example.

Top War, a military simulation SLG, is Rivergame’s flagship title, and its widespread popularity put Rivergame in the top 13 Chinese game publishers by overseas revenue in July 2021, according to Sensor Tower statistics. Top War was also selected as the Best Competitive Game by Google Play in 2020.

Top War’s demographic—mostly males in their 30s—overlaps perfectly with the Transformers brand in terms of user base and popularity. This made it an ideal choice for Hasbro to partner with, and Yodo1 was involved from concept to launch to ensure success.

Projects like these between top companies can take months or even years to finalise, but in this instance, the launch went live just a little over three months after the deal was signed.

This rapid progress was due to Yodo1’s experienced Brands In Games (BIG) team, whose planning, know-how and hard work made the impossible happen.

Rivergame CEO, Hu Chao, said: "The collaboration with Yodo1 and Hasbro has achieved a highly satisfactory result. And Yodo1 has shown real professionalism throughout the process, which has made our job dealing with a large project like this much smoother. Their market knowledge and strong execution capability made it possible for us to launch this global collaboration quickly and effectively."

"We focus on collaborations that bring a massive impact for both the intellectual property (IP) holder and the game developer. This collaboration between Hasbro and Rivergame’s Top War is a great example of this focus. We are delighted by the success of this project, which paves the way for a long-term and mutually beneficial partnership between Rivergame and Hasbro,” said Yodo1 Co-Founder and Co-CEO James LaLonde.

Is Your Game Looking For an IP Collaboration?

Yodo1 is selective in the partners chosen for mobile game IP collaboration, with stringent selection and evaluation mechanisms in place to ensure the developers we connect with IP holders are highly qualified and standouts in their game genre.

Yodo1’s bilingual teams keep in close communication with the licensor and developer throughout, ensuring the project is smooth and trouble-free for both parties.

Moving forward, Yodo1 aims to broaden and continue the success with Hasbro and other global IP holders, working every step of the way to ensure that Hasbro’s strict quality standards are met. The company's track record of consistently bringing value to all parties means gamers around the world can continue to enjoy games that feature their favourite IP characters.

If you are a developer interested in levelling up your game success with renowned IPs and want to learn more about possible collaborative deals, reach out to Yodo1’s BIG team today.