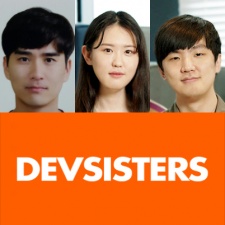 Devsisters' flagship endless runner title, Cookie Run, was an enduring title for the South Korean team. But it took the move to the RPG genre for Devsisters' to find Cookie Run: Kingdom – its most successful game yet and the winner of the team's first English-language award, taking Pocket Gamer People's Choice at the 2022 Mobile Games Awards.

Cookie Run: Kingdom project directors Kilhyeon Cho and Eunji Lee and Danny Huh, senior project manager spoke with PocketGamer.biz on adding a new twist to the franchise, whether it will follow in investor Com2Us' blockchain ambitions, and how South Korean talent is steadily becoming recognised.

PocketGamer.biz: The Cookie Run franchise was first launched in 2013. What has been the most significant change in the industry since?

Devsisters: We think the most significant change is that the global audience has developed a more sophisticated perspective on mobile games.

Devsisters have always prioritised enhancing the gameplay experience by examining trends and new technologies and focusing on the development of the Cookie Run universe.

The world is becoming more exposed to Korean culture through film, music, dramas, and other media content

In the beginning, when mobile games began to shift from being mass-produced to a more sophisticated model, we knew creating high-quality content was essential for our success.

Cookie Run: Kingdom, which saw a move from the endless runner genre to an action RPG, is also the most successful game in the franchise. What challenges did Devsisters face in bringing its audience to a more involved genre?

When we started to develop Kingdom, we knew that we had to expand the universe while honouring the Cookie Run IP. We spent a lot of time thoughtfully crafting every detail, from the structure and appearance of the Cookie universe, and the historical events that transpired there to the diverse cast of characters that live in those lands. Adding more immersive elements to the game was a top priority.

This has been a challenging process, both technically and artistically, but it is a challenge we feel is necessary to provide the best player experience possible, which is why we have never given up putting effort into it.

Cookie Run: Kingdom has allowed the IP to grow in meaningful and impactful ways and has opened the doors to keep exploring and expanding new ideas. We released the Cookie Run artbook, containing details of the Cookie World, alongside Kingdom to celebrate where we started as a developer and where we can go.

Devsisters' titles have been strictly released on mobile. Is the studio exploring publishing in non-iOS or Android app stores or, indeed, on other platforms such as PC?

Since 2009, starting with OvenBreak on the Apple App Store, Devsisters has provided Cookie Run games on iOS and Android, steadily developing an infrastructure of know-how and experience for mobile game services. In addition, a brand new project and intellectual property in the shooter genre, Dead Cide Club, will be introduced via Steam and console to expand our platforms.

Cookie Run: OvenSmash is another Cookie Run game that we plan to release on PC in the first quarter of next year, followed by both mobile and console versions in the future. Devsisters hopes to continue providing content, not only on mobile but via multiple platforms for the years to come.

We are very grateful to have won the Pocket Gamer People's Choice award! Winning this award means so much because a global audience voted for us.

Our team tried our best to spread joy, inclusion, and love through Kingdom, and it feels wonderful to know that our message has been received.

Our game is unique because it combines elements from different genres; it may take a minute to get used to, but our players have mentioned they keep coming back due to our consistent updates and changing game mechanics. We are also very generous with our rewards, and we are always looking for ways to enhance the player experience.

Another critical factor is the time and effort put into developing each Cookie. Each character has its complexities and charms. We also spend a great deal of time making sure our Cookies resemble our diverse global community. We’ve seen our fans respond to this beautifully, often personally relating to one of the Cookies.

During the acceptance speech, it was revealed that the MGA People's Choice award was Devsisters' first English-language award, despite Cookie Run's international success. What kind of awareness do you think the international mobile games sector has of the Korean industry?

Blockchain is very exciting but still in its infancy [...] we have a lot more research to do to verify its suitability and effectiveness

This is an exciting time for game developers in Korea as we seem to be reaching a global audience. The world is becoming more exposed to Korean culture through film, music, dramas, and other media content. We strive to continue to create bold and fun experiences in our games that further introduce Korean studios to an international audience.

We are always looking for ways to improve our games through industry trends and emerging technologies. However, it’s essential to make sure we do what’s best for fun and our community. Blockchain is very exciting but still in its infancy, and we feel that we have a lot more research to do to verify its suitability and effectiveness for our games.