Available in Belgium, Netherlands, Canada and the Philippines 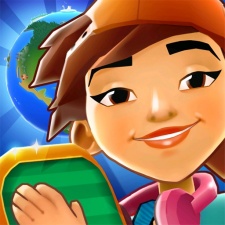 Similar to the studio's ginormous hit Subway Surfers, released in collaboration with Kiloo, players must dash and dodge through oncoming trains as they escape from a grumpy Inspector and his dog while riding hoverboards.

Subway Surfers has accumulated 2.5 billion downloads since launching in May 2012, hence why it seems the studio looks to be staying in the same genre for the near-future.

Train Riders is available to download on both iOS and Android but is only accessible in Belgium, Netherlands, Canada and the Philippines. No official release date has been given at this time.

PocketGamer.biz has reached out to Sybo Games for more details.

Previous to this, we caught up with Sybo Games CEO Mathias Gredal Nørvig following the seven-year anniversary of the endless runner.