Microsoft and Discord now partnering with Backbone following Series A funding round. 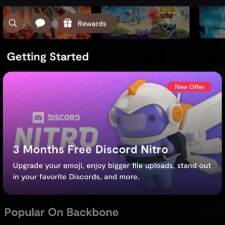 After launching in 2021, Backbone’s Series A funding round took place in February 2022 with the intention of bringing games from all platforms to mobile. A total of $40 million was raised in the round, led by Index Ventures and with angel investments from celebrities.

Backbone+, Backbone’s premium service, is a reimagination of the app with exclusive perks, in-game loot, and free trials.

Subscribers to Backbone+ will now gain three months of Discord Nitro, as well as gain a free month of Xbox Game Pass Ultimate.

In turn, player experiences on Backbone will be enhanced, increasing the benefits of this new partnership.

Mobile business platform ironSource recently announced the signing of a three-year deal to continue its mediation partnership with the publisher Tilting Point.

Discord users can have text conversations with Matrix-based apps

Discord valuation has doubled to $7 billion