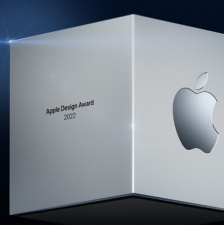 Overboard! won the game award in the "Design and Fun" segment, and whilst each category celebrated one app and one game, the winning app for the category, (Not Boring) Habits, also features gamelike elements – being a life-hack adventure taking place in the mountains.

The game that won Apple’s "Social Impact" award was the Austrian title Gibbon: Beyond the Trees, an Apple Arcade original with an environment-conscious storyline.

Gameloft’s Lego Star Wars: Castaways won out in the "Visuals and Graphics" group, beating Silver Lining Studio’s narrative-driven puzzle game Behind the Frame among others.

Wylde Flowers and A Musical Story among them as "Inclusivity" and "Interaction" winners respectively.

The final award, "Innovation", saw its winners determined on the basis of their creative, novel use of Apple technologies. Netmarble’s open-world action RPG Marvel Future Revolution won among the games following its prior win as the 2021 iPad Game of the Year.

Susan Prescott, Apple VP of worldwide developer relations, commented: "As apps and games remain an essential part of our lives, we’re excited by the ways that developers continue to use our technologies to create standout apps for people everywhere.

"The work of this year’s Apple Design Award winners embodies how apps can be transformative, uplifting, or even provide an escape through creative gameplay — and we congratulate each developer for all they’ve accomplished."

Last night (June 6), Apple unveiled iOS 16 at the WWDC keynote, and while the Cupertino tech giant also revealed its upcoming Metal 3 API, there was a distinct absence in mobile games updates.