From rhythm to RPG to WTF? 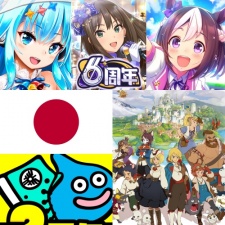 Japan is the birthplace of some of the most iconic video game franchises ever released, such as Super Mario and The Legend of Zelda, or Final Fantasy and Pokémon.

In more recent years, Japanese studios have dominated the mobile games industry, despite a significant portion of games not being released outside of the country.

There are many reasons why this may be, for example, the cost of localisation may be too high or the developers believe that the game centres too heavily on Japanese culture that other countries would not understand.

The land of the rising mobile game revenue

It’s true, certain themes or cultural references in Japanese games can significantly differ from the ones Western audiences are accustomed to and from an outside perspective the country has received a reputation for producing "weird" media.

Whatever the reasons, Japan does not need to rely on the worldwide distribution of mobile games, with many titles performing exceptionally well despite their limited worldwide availability.

Here at PocketGamer.biz, we have taken a look at some of the most intriguing Japan-exclusive mobile games that we want to play!