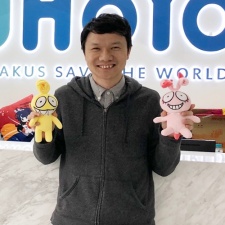 Western players may have only been recently acquainted with MIHOYO's Honkai Impact 3rd after it launched worldwide two months ago but the game has been attracting a fanbase in Asia since 2016.

After hitting one million downloads in Japan 11 days after its launch, Honkai Impact 3rd would go on to pass the 35 million mark with additional releases in Korea, Southeast Asia, Taiwan and China.

Visually the game takes influences from Japan’s pop-culture with anime-inspired cutscenes, while it even has its own manga to build upon its world. Throw in some gameplay cues from hack-and-slash favourites Devil May Cry and Bayonetta and you have some popular ingredients indeed.

As the game settles into Western life we took the chance to catch up with Forrest Wei Liu, the president at MIHOYO who players refer to as Brother Wei, to find out more about the game's development and its journey West.

PocketGamer.Biz: What was your thought process behind Honkai Impact 3rd?

Forrest Wei Liu: Our mission statement has always been about the devotion of Japanese ACG (Anime, Comics, Games) culture. To strengthen the Honkai Impact IP, we’ve created manga and anime cutscenes to go along with the game.

Our goal for Honkai Impact 3rd was to create the best Anime-inspired ARPG mobile game on the market.

Our goal for Honkai Impact 3rd was to create the best Anime-inspired ARPG mobile game on the market.

Can you tell us about some of the creative influences for Honkai Impact 3rd?

We took inspiration from some classic action console games, such as Bayonetta and Devil May Cry.

Bayonetta specialises in a unique form of combat called Bullet Arts, supplementing her melee strikes with a huge variety of firearms strapped to her.

We really wanted to bring this kind of top-tier 3D action experience to Mobile. We also wanted players to be immersed in the Honkai IP and put a lot of effort into integrating story cutscenes into the game progression.

Was the title always going to be free-to-play or did you toy with the idea of premium?

Since our goal is the promotion of ACG culture and the Honkai Impact IP, we wanted this to be as accessible as possible to our fans. Along with making the game free-to-play, we wanted the focus to be on the experience.

We wanted players to be driven by affection for the IP and its characters, rather than feeling obligated because of certain in-game mechanisms.

How big was the team on Honkai Impact 3rd and how long was the total development time?

The total team of Honkai Impact 3rd is around 200 people, over 100 are research and development.

We started on the project in 2014 and first launched at the end of 2016, we’ve been in development for two years and the team is always working on new content and ways to improve Honkai Impact 3rd.

Bringing console-level control and combat experience to mobile has always been a challenge.

Bringing console-level control and combat experience to mobile has always been a challenge.

Those classic console action games, such as Bayonetta, use a controller to allow the player to perform complex combos using both melee and long-ranged attacks while using multiple weapons.

This kind of control is very common for action games on console, but bringing that kind of action experience to mobile with the limitation of virtual joystick control was our biggest challenge.

We put in huge amount of effort into the balance between simplifying the controls while keeping action experience of consoles.

Was there any feedback on the game during its beta testing that surprised you?

I surprised to see the amount of passion that the community had for our game.

We received a lot of assistance from fans during beta testing with localisation optimisation, guides and surveys which gave us a lot of valuable feedback.

We are really thankful for the support from the community and we want to deliver the best experience possible to them.

Is there anything you wanted to do with Honkai Impact 3rd but didn't get the chance to?

Honkai Impact 3rd’s progression was divided across different servers, which barred from players enjoy the same game together as one community, we were also unable to support more language right from the beginning which has also been a pity for me.

For the next title, we’d really like to incorporate all fans from the start and allow them to enjoy the game at the same progression.

What elements of Honkai Impact 3rd were you most excited about?

The anime-style graphics, the team managed to seamlessly interpret the artist’s impression and keep the game’s anime style while using 3D technology and rendering to update the 2D sprites from previous Honkai Impact games.

We wanted Honkai Impact 3rd to be visually impacting, as a way to attract Anime fans.

It’s certainly met our expectation so far and the great support from the fans has made us feel more confident about distributing the Honkai Impact IP globally.

What’s next for Honkai Impact 3rd?

In the future, we will keep working on the Honkai Impact IP, not only in-game but also Manga, Comics, merchandise, etcetera; bringing more rich content that our players like.

Our ultimate vision is to build a world of Honkai Impact for players to immerse themselves in.

Check out more from our Making Of series right here.