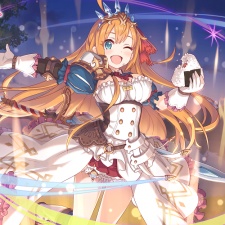 This week, we spoke with Crunchyroll general manager of games and head of 360 Terry Li on the localisation and upcoming worldwide launch of Princess Connect! Re: Dive, three years after it originally released in Japan.

PocketGamer.biz: Can you start off by telling us about Princess Connect! Re: Dive?

Terry Li: Princess Connect! Re: Dive is a popular hero-collection RPG that was first released in Japan back in 2018, published by the acclaimed developer Cygames. The game reached the top of the mobile charts in Japan and was also subsequently released in China, Hong Kong, Taiwan, Macau, Korea, Japan and Thailand, where it also sparked tremendous fandom and player interest.

Princess Connect is a great example of a game that was successful but due to the fact that the game is an original IP and there wasn’t a lot of Western press...

Princess Connect combines sophisticated gameplay with high-quality animation. Players begin their journey across the land of Astraea alongside heroines to fight spirited, real-time battles. Each heroine can be powered up and strengthened as the story progresses, unlocking special story content. The game features a deep storyline, a wide cast of characters, numerous game modes, and high-quality voice actors and music.

Crunchyroll Games, the in-house publisher and distributor of interactive content from the world’s most popular anime brand, is collaborating with the aforementioned Cygames, as well as funplex, a live-ops management and game operations company developed by Gree to launch the game in English to anime fans worldwide.

How did you first hear about the idea for the game?

As fans of Japanese anime games, we’ve followed the success of Princess Connect for quite a while. The team knew it would be a tremendous success and a potentially great fit for the Western market. We watched the growth of both the game and the fandom, and started thinking about ways to help bring it to the West.

How did the partnership come about between Crunchyroll and Cygames?

Crunchyroll, through its rapidly growing streaming service, engages with numerous Japanese brands, licensors, and IP owners to constantly look for new ways to collaborate. One such company that we developed close working ties with was Gree, another successful game developer in Japan.

Through an ongoing relationship, Gree connected us with many developers including Cygames. Crunchyroll and Cygames began an active dialogue. In recognising each other’s value and vision, we formed a partnership to launch Princess Connect globally.

Why did you think this would be a good fit for the Western market?

Crunchyroll Games aims to bring amazing anime-style games to the West, that often includes games that are super popular in Japan and Asia but relatively unknown to the broader Western audience.

Princess Connect is a great example of a game that was successful but due to the fact that the game is an original IP and there wasn’t a lot of Western press, only core fans knew of its existence. We saw an opportunity to help bring the game over and amplify its reach through our global anime video platform and viewership community.

Additionally, as fans of both anime and gaming, we thought the Princess Connect IP itself, along with the themes, characters, and setting would suit the broader anime audience quite well. The character art styles, voice acting and storylines were all superbly crafted, so we knew this would resonate with our fans.

With these beliefs in mind, we licensed the anime (which came after the original game in Japan) for our service, as a way to pique audience interest and build fandom before we brought the game itself over to the West.

Do you know how long development took, and how many people worked on the project?

In order to bring this game to the West, Crunchyroll Games worked very closely with the live operations partner, Funplex. A team of 17 people, consisting of engineers, planners, designers, and translators worked together over six months to prepare for both soft and global launch in the West.

What was the biggest challenge you had to overcome?

Given the rapid timeline to launch, Crunchyroll and our partner Funplex faced a number of challenges across development and testing. Perhaps the biggest challange was the need to translate close to a million Japanese characters while maintaining the high-quality writing that is present in the Japanese version.

The pandemic has undoubtedly made the overall development and porting process more complex and challenging.

Due to the speedy launch milestone, the sheer amount of coordination and planning, as well as the importance of ensuring such a big game was ported correctly, we really held off on any premature celebrations until the very end.

It wasn’t until the end of the beta release, when almost all of the development and localisation was fully complete, that we finally felt we had done the original game justice. Then we felt it was nearly ready for an English speaking audience to enjoy.

Why do you feel March 2021 is the right time to launch globally?

With a big game like Princess Connect, we thought long and hard about the right time to bring the game to the West. On one hand, we wanted an opportunity to build an audience for the underlying IP and garner enough curiosity - so we did this through licensing the anime and promoting the first season through our service, and the anime did quite well.

On the other hand, we also did not want the global version to be too far behind the Japan and Chinese versions. They’ve been running for two years, and we wanted to ensure the fans in the West could get excited by the growth of the game but not fall too far behind. Given both of those factors, along with the fact that anime-style games have been on a recent rise, we felt this was the right time to launch Princess Connect globally.

Over the course of Crunchyroll’s own growth, we’ve seen how our community appreciates and seeks out our 360 engagement through content, events, manga, and certainly games. The game supports just that with high-quality animation, in-depth gameplay, and systems which perfectly fit the mould to target our core Princess Connect anime and JRPG fans globally.

Simultaneously, Princess Connect is a simple and easy game to pick up for casual gamers thanks to features like Skip Tickets, AFK-farming via your Guildhouse, and auto-battles. Anime fans will be overjoyed with high-quality 3D cinematics, graphics produced by renowned animation studios, and an engrossing classic Isekai fantasy story.

Finally, core fans who may have discovered Princess Connect through its IP collaborations with Granblue Fantasy, Dragalia Lost and Shadowverse can now explore a world they’ve been dying to see for over three years.

The pandemic has undoubtedly made the overall development and porting process more complex and challenging. As you can imagine, our live ops partner Funplex saw a huge impact in moving the whole development team to work remotely.

As a result, they had to rely on video calls and messaging applications as their main form of communication, which undoubtedly disrupted usual team dynamics. Nevertheless, Funplex and Crunchyroll managed to power through and achieve a great final product despite the pandemic challenges.

What can you tell us about Princess Connect! Re: Dive's plans once launched?

Fans can expect regular new character releases along with their story and lore, coupled with limited time story events.

We will continue to pursue active publishing opportunities and collaborations with key Japanese developers on quality games and IPs.

Whether we’re talking about existing anime games, original IP games, or other forms of interactive experiences - we believe in a 360 approach when engaging our fans, so our goal will be to consistently port and publish new games at regular intervals. You can expect many more great games to come.