From Pokemon Home to Pokemon Rumble Rush, there's plenty of ups and downs to look at 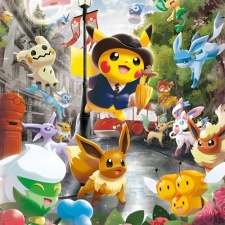 The first Pokemon games on the original Game Boy were launched in Japan on February 27th, and as such, Nintendo has marked the day as "Pokemon Day".

Far from being a recognised holiday, it instead marks an opportunity for The Pokemon Company to reveal new information about upcoming games, or add shiny new Pokemon to existing entries, as has happened this year.

And while we at PGBiz are loathe to jump on any bandwagons, it does give us an opportunity to take a look at Pokemon's latest mobile outings and see how they've been performing over the last three months.

We chose to look at the series' two biggest markets - Japan and the USA - and limit our focus to the three most recent releases: Pokemon Home, Pokemon Masters, and Pokemon Rumble Rush.

Let's look at Pokemon Home first. An app designed to transfer Pokemon between games, in particular the Switch titles Let's Go, Pikachu/Eevee and Sword/Shield, the app first launched on February 12th on both Android and iOS.

Indeed, initial impressions were strong. Sensor Tower estimated that the app had generated $1.8 million in revenue in its first week of release, which isn't bad considering the IAPs are simply three different tiers of subscription.

Looking at the top grossing rankings on App Annie, however, show that interest in the app is waning pretty rapidly.

On iPhone, the app shot straight to the top of the overall grossing charts in Japan, and peaked at a respectable 5th in the USA. However, it's seen a steady decline in the East and a hefty drop in the West - as of February 25th, it had fallen to 696th place in the US, and 189th in Japan.

The Android charts tell a bleaker tale. Pokemon Home failed to break into the top 100 spots in the US, and peaked at 83rd on February 19th in Japan. Since then, however, both countries have seen rapid decline, completely disappearing out of the charts from February 21st onwards.

The most recent true Pokemon mobile game to launch on mobile was Pokemon Masters, a surprisingly decent 3v3 battler with a heavy gacha element from DeNA. Our staff writer Matthew Forde even ranked it as his favourite game of 2019.

Critical acclaim aside, its performance in the grossing charts has seen some ups and downs. On iPhone, the game is holding fairly steady in the top 1,000 apps overall in both the US and Japan, though it hasn't broken into the top 100 in the US in the last 90 days.

There do seem to be signs of growth - following an update on February 14th, the game shot to 29th in Japan and 167th in the US, though it did drop out of the top 100 in Japan in a matter of days.

This seems to be a pattern, however. Most updates appear to cause a leap in grossing rank - perhaps with a more stable update cadence, Pokemon Masters could have a more consistent position in the charts.

Except on Android, where the game's performance could be charitably referred to as "spotty", particularly in the US. It peaked at 129th in the West on February 2nd, but has completely dropped out of the top 200 ranks since. It's placed slightly more consistently in Japan, though, peaking at 75th on February 21st.

Shortly before Pokemon Masters came Pokemon Rumble Rush, the fifth entry in developer Ambrella's Pokemon Rumble series. It features toy-like Pokemon duking it out in real-time battles, which sounds like a winner - though our sibling site Pocket Gamer didn't find it too enjoyable in its initial preview.

And the less said about the Android release, the better. It hasn't cracked the top 200 overall ranks on the platform in the past 90 days, though it has seen steady performance in the Action (Games) category, peaking at 32nd in Japan and 80th in the US.

It should at this point be noted that being a consistent charter in the top 100 overall grossing ranks of an app store doesn't make a game instantly successful. Indeed, steady performance at a lower level can still generate enough cash to keep a company's coffers full.

But with a brand like Pokemon, you'd perhaps expect these titles to be performing better than they are.

For a ridiculously unfair comparison, let's take a look at Pokemon GO, a game fast approaching its fourth-anniversary with no indication of slowing down.

Over the last 90 days, it hasn't fallen out of the top 35 overall grossing ranks on iPhone in both Japan and the US. Indeed, in Japan it's pretty consistently sat in the top 15 ranks, while in the US it's hovered between the 15th and 30th positions.

It's a similar story on Android - you can see the main dips in grossing rank around December, but it's bounced back up into the top 20 ranks in both countries through January and February.

That's pretty good going for a game that people were saying was "dead" within months of its release. However, it's worth noting that the game is pretty exclusively geared towards its hardcore, existing fanbase at this point - lapsed players and newcomers are going to struggle to break into the game's many, many systems at this point.

But that also shows the biggest difference between Niantic's take on Pokemon and the Pokemon Company's own games. While the latter tries to keep its monetisation light and mechanics relatively simple, Pokemon GO has added more and more complexity over the years to retain engaged fans for longer.

Of course, Niantic needs to retain its fans on a handful of games. The Pokemon Company will be making money from a range of other businesses - aside from mobile and console games, it also has its anime and merchandise to draw revenues from.

The Pokemon Company might not be seeing great revenues from its own mobile Pokemon releases, or even with its DeNA partnership, but licensing those little creatures across as many avenues as possible is its true goal. It doesn't want you hooked on one game - it wants you hooked on the entire ecosystem of Pokemon.