Think you can ignore China? 261 million active smartphones and tablets suggests not

Flurry's there with the figures

July 24th, 2013 - 02:36am
By Matthew Diener, US Correspondent
Consumers in China have purchased a full 24 percent of all the connected devices available across the globe.

That's according to a new report published by analytics specialist Flurry, with the firm claiming there are more than 260 million active smartphones and tablets across the country.

That's a figure that's up a whopping 423 percent from the 50 million Flurry believes were in China back in 2010.

Indeed, by Flurry's reckoning, such a number puts China ahead of the United States as the country with the largest installed base of connected devices.

Flurry's figures also suggest time spent on smartphones and tablets is monopolised by gaming, accounting for 56 percent of the minutes and hours Chinese consumers spend on Android devices and 47 percent of the time amassed on iOS. 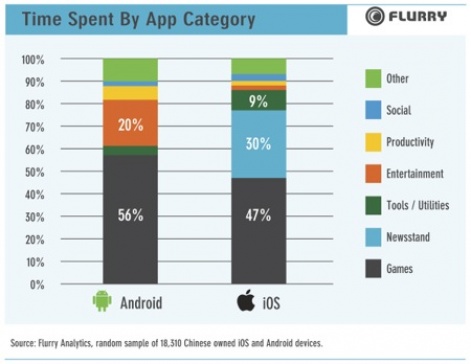 Intriguingly, this indicates that the typical connected Chinese consumer is more interested in gaming than their US counterparts.

Earlier this year, Flurry found that the average US consumer spent roughly 32 percent of their time gaming, with Facebook activity not too far behind at 18 percent.

But who is leading the charge in the smartphone race in the region? Flurry notes that one of the biggest players in China is home-grown Android manufacturer Xiaomi.

While Apple and Samsung are still jockeying for control of the Chinese consumer market - commanding respective shares of 35 and 15 percent - Xiaomi is growing strong at 6 percent, with a reported revenue of $2 billion for the first half of 2013. 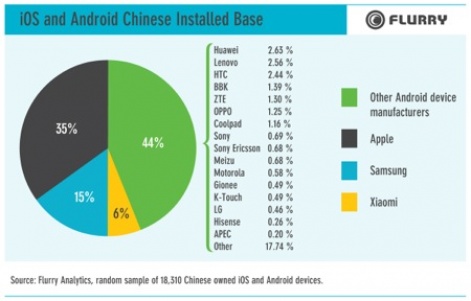 "It will be interesting to see if Xiaomi can continue to gain share in China  possibly by mopping up share from smaller manufacturers of Android devices  and also if they can begin making gains in other markets outside of China to become more of a global player," detailed Flurry's Mary Ellen Gordon.

"With rumours of a Xiaomi tablet circulating, we will also be watching to see if their entry into the tablet market will increase the use of Android tablets in China."