Play PS Vita, PSP or PlayStation games on the box 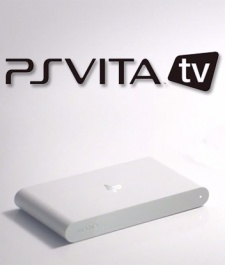 Set to hit Japan this November, PS Vita TV is based on the hardware behind Sony's handheld and enables gamers to take on PS Vita, PSP or original PlayStation games on their television.

It also links up with the firm's forthcoming PS4 for cross-functionality.

More interesting, however, is just how closely positioned PS Vita TV will be to Apple TV, supporting media platforms such as Hulu and Sony's own Video Unlimited.

Games  played via a DualShock 3 controller  are being built into the TV platform in much the same way that many people expect apps to be syphoned into an updated Apple TV, although just when Apple will announced such a device is currently up in the air.

Some commentators believe an updated Apple TV may be part of Apple's iPhone 5S/5C unveiling later this week, though the press event isn't expected to play host to the launch of an app-equipped version. That, it's believed, may come later.

Either way, PS Vita TV - which will launch in Japan from ¥9,480 (around $95) - essentially attempts to tick many of the same boxes, with a release in Europe and the US on the cards, but not yet pencilled in.

Reply
Fraser Ross MacInnes Product/Design Director at Danke Games
Despite all of the industry punditry concerning an Apple TV gaming set-top box (including from myself), I don't think this device is specifically a reaction to Apple or an attempt to pre-empt it (though that is what the VitaTV may well end up doing).

I don't know what the global roll-out plan for this thing is, but my guess is, this is a test to see if there's market hunger for a sub-100 playstation branded set-top box. That puts it in direct competition with a broader range of devices, including all existing unconsoles, as well as things like the Roku and the Chromecast.

It's a very smart way for Sony to leverage huge swathes of content at a no-brainer price point. If I was faced with a retail shelf containing a GameStick (which I backed on Kickstarter), an Ouya and a Vita TV, the choice would be easy. It's all of the disruptive paradigm bending plastic of the former two coupled with the promise of a library that virtually no vendor in the space can compete with. Chuck in an A grade controller and you have a very compelling package.

If anything, I don't think it's Apple that is being schooled here (yet), I think what the Vita TV does is expose the vulnerability of the existing unconsole players. Ouya and GameStick may have paved the way innovation-wise, but I suspect Sony's strength in branding and content will sadly leave those platforms as mere opening chapters in this new device category.
Posted 8 years, 9 months ago