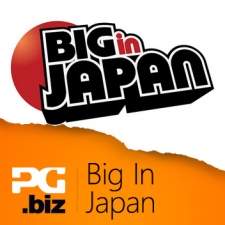 Colopl's name may not carry the same clout as GungHo or GREE, but that could change soon the way the company's titles have been performing.

With high expectations for colopl's recently-revealed "tactile action" title Slingshot Braves, it could be just a matter of time before the Big Gs have to make room for a new consonant on the block.

For those interested in giving the game a try for themselves, we've also put together a handy guide for downloading and installing CROSSxBEATS, complete with menu translations and play tips.

Mixi and Crooze sailing smoothly in a turbulent stock exchange

The Tokyo Stock Exchange has fluctuated the past week, but publishers Mixi and Crooze continue to post reassuring numbers.

Even a little good news for GREE

Although the decline in sales of traditional cellular phones have continued to take their toll on GREE's bottom line, the Nihon Keizai Shimbun reports: "In contrast to the period from July through September, GREE did not experience losses due to reigning in or cutting poorly performing titles. As a result, bottom-line profits increased slightly in the period from October through December".

Level 5's WonderFlick still not up and running

We're putting this one at the top of the list just because we want to play the game so bad already!

After pumping tons of money into television advertisements and a huge awareness campaign, Level 5 has struggled to get WonderFlick up and running, eliciting fan ire and at least one pretty funny video.

As of the time of this writing, Level 5 is aiming for the 18th to complete the ongoing server repairs that have plagued the title since its first "release".

We'll keep our fingers crossed, but not too tightly. We don't want them to cramp up when it's time to flick.