Use of physical objects will control the virtual world 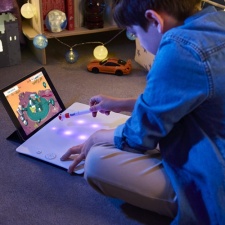 Bandai Namco has revealed a new platform targeted at children aged six to 12 that combines physical toys with mobile gaming.

Called Tori, the platform enables users to play with physical objects such as a wand, catapult or spacecraft and then use them to interact with the virtual world.

Bandai Namco has partnered with French firm ISKN, which has developed the technology behind the ‘Slate’ board that enables the physical to interact with the virtual, on the project.

The Tori Explorer Pack will be released on October 2nd 2019 and will be compatible with iOS and Android. Five apps will be available at launch.

“We believe in creative, playful and active methods that develop activities where problem-solving, creativity and concentration are at heart,” said Bandai Namco Entertainment Europe SVP of marketing Herve Hoerdt.

“In such regard, tori allows kids to have fun and express their personality through creative and interactive experiences with a perfect balance between on and off-screen time.”