Everywhere is a boomtown for Com2uS, but especially Europe and Asia

Korea is now the laggard 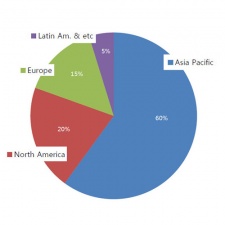 As demonstrated by Com2uS' FY14 Q3 financials, a year can be a long time in the F2P mobile games industry.

Compared to the equivalent three month period 12 months ago, the Korean mobile developer and publisher - which is majority owned by Gamevil - saw its sales rise 102 percent and net profit up an amazing 3,165 percent.

Yet those figures mask an even more surprising turnaround.

18 months ago, on the back of the rise of KakaoTalk as the dominant gaming platform in Korea, Com2uS saw its quarterly sales from its domestic Korean market peak at around $16.5 million.

In contrast, the company's international sales - at around $5-8 million - hadn't changed much quarter-on-quarter.

This was interesting as before the rise of Kakao in FY11 Q4 and FY12 Q1, the split of Com2uS' sales had been 51 percent from Korea to 49 percent international.

But by FY13 Q1 - which was the peak of its Korean sales - the split had become 77 percent domestic to 23 percent international.

Since that quarter, however, the situation has reversed so that now, 18 months later, Com2uS generated 80 percent of its sales outside of Korea, with the APAC region - notably Japan, China, Taiwan and Hong Kong - accounting for 60 percent of international sales.

North America and Europe, which typically have been considered the lucrative market (as least in the west), are a static segment.

Yet this isn't to say that the rest of world isn't important for Com2uS, nor that Com2uS' sales in North America and Europe are growing fast too.

If we consider year-on-year growth, the situation is as follows.

Alternatively, quarter-on-quarter growth is as follows.

But let's not get too hung up on figures.

The broad conclusion to draw from Com2uS' recent financial performance is that on the back of two hit games Summoners War and Ace Fishing, the company has experienced massive growth everywhere.

And that growth has been particularly massive in Europe and Asia, not Korea and North America.