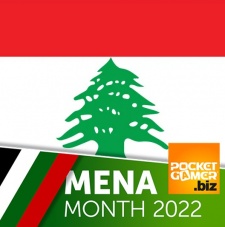 Ghaith Fleifel, Inkline’s Founder and Executive Producer, emphasizes the importance of localization in games for the MENA region.

If Lebanon’s mobile gaming market is to grow, the country will first need to shake off its years-long financial crisis – one of the worst globally since the mid-19th century, according to the World Bank. The crisis has limited investment in the gaming app industry as well as the broader technology market. For example, capital controls that restrict payments abroad and an ongoing exile of talent are limiting the ability of companies to launch and grow.

Internet speed will need to increase if Lebanon is to grow its gaming user base, currently estimated to reach 1.4 million users by 2027. The country ranked 163rd out of 181 countries in terms of fixed broadband performance in September 2022; it did somewhat better in terms of mobile speed performance, ranking 71st out of 139 countries.

Based in Beirut, Lebanon, Inkline Games is known for producing titles that raise humanistic awareness while delivering adventure, local flavour, and inspiring heroes. For example, the story in Ayo: A Rain Tale revolves around young girls who travel far each day to bring water to their families.

Ghaith Fleifel, Inkline’s Founder and Executive Producer, emphasizes the importance of localization in games for the MENA region.

“Growth and opportunity in the region lie in catering to the region’s audience, culture, and environments – going beyond language localizations, for example, to give players settings and locations that are relevant to them,” Fleifel says.

For Fleifel, the best way to go local is to be local, he says: “Being located in MENA can provide insights into a large market with commonalities of language and culture.”

Other games industry experts from Lebanon include Joseph Azzam, of Epic Games and Arabic Games, and Reine Abbas, of Wixel Studios and SpicaTech. You can read interviews with them on PocketGamer.biz now.

Discover the region in the company of games experts

Want to meet market experts and find out more? Just over 300 km from Beirut, Amman makes a convenient destination for own PocketGamer.biz annual event, Pocket Gamer Connects Jordan 2022, two days of networking, learning, and presentations expected to be attended by nearly 1000 gaming industry professionals from all over the globe.

As well as the conference, it is possible to visit Petra on Monday, 15th November, to see one of the true wonders of the world.

You can also join other global and MENA leaders a fortnight later in Saudi Arabia for our first Leaders Summit.