It's not just about the games

May 31st, 2013 - 12:44pm
By Jon Jordan, Contributing Editor
We been looking at the rise of social services like LINE and KakaoTalk during 2013 because of their gaming significance.

But the platforms started out as pure messaging services before rolling out specific game services for developers to integrate with.

In this context, the recent survey from market intelligence outfit App Annie points out their significance is more than just games.

Stripping games from the equation, App Annie estimated the breakdown for the top grossing Google Play apps globally during April 2013.

Both apps monetise through customisation items such as stickers and gifting.

Interestingly, GREE ranks #3 on this list, thanks to its own social messaging app which it moved from the Games category into Social earlier in 2013. 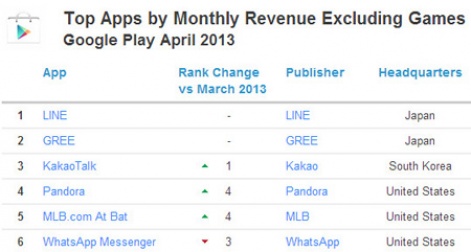 Notably missing on this list is DeNA's similar Comm app, which is launched in October 2012. Only available in Japan, it currently has 5 million users.

To understand the full impact of these services in territories such as Japan, Korea, Taiwan and Thailand, you have to combine these social app revenues with games, however.

As App Annie's games report for April makes clear, the top games that use these networks to provide virality and retention are performing very well.

WeMade's Windrunner for Kakao was the #2 top grossing game globally on Google Play, while CJ E&M's Everybody Cha Cha Cha for Kakao was #3. 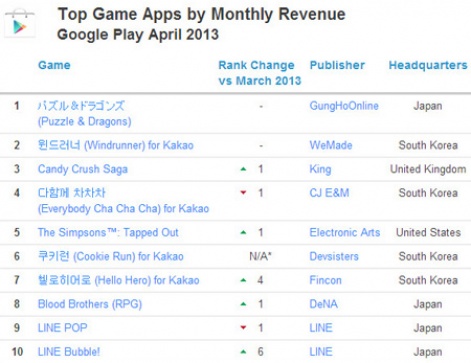 It's no surprise, then, to see WeMade, CJ E&M, LINE and NHN (LINE's parent company) all listed in the top 10 top grossing publishers on Google Play. 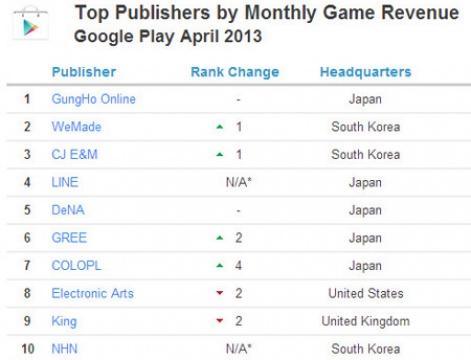 You can find out more by reading App Annie's App Index and its Games Index.

How May the Fourth drives growth for Star Wars content

Crash Bandicoot: On the Run - 400% faster than other endless runners

Reply
jon jordan
Thanks. It is suprising how quickly they have risen and will be fascinating to see how much impact they have outside Asian.

Both Kakao and LINE are gaining traction in Spain for example

Reply
App Promotion
Glad someone is covering this - very underappreciated how important these platforms are becoming. Game Centre and Facebook are only part of the story and have not won identity on mobile by a long chalk ...
Posted 7 years, 11 months ago