Deal made in two parts by subsidiary Image Frame Investment 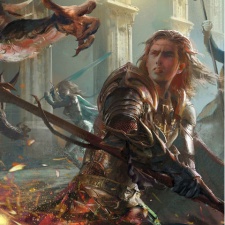 Tencent has acquired a 9.9% stake in China-based mobile and PC games developer Seasun for $142.2 million.

According to Mobile World Live, the acquisition came in two parts and was made via Tencent subsidiary Image Frame Investment.

It acquired 4.3% for $62.2 million from Seasun's parent company Kingsoft, and the remaining 5.6% from WestGame Holdings, United Websoft and Xiaomi Ventures for $80 million.

Seasun is known for games such as GO Titans, Ships of Glory and Brave Cross. It has also previously worked with Tencent to release JX Online.

"By introducing Tencent Group as a strategic investor in Seasun, Kingsoft believes that it will further strengthen the business cooperation in the game area between Seasun Group and Tencent Group in the future," said Kingsoft in a filing to the Hong Kong Stock Exchange.

"The two parties will cooperate and jointly draw on their complementary strengths so as to provide better entertainment experience for more end users."

Tencent is one of the biggest players in the games market in China. It recently partnered with Ubisoft to release a mobile-focused entry in its Might & Magic series.