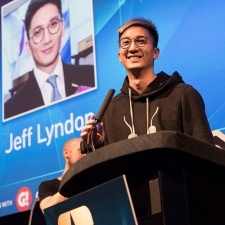 Jeff Lyndon has over ten years of experience in the game development and publishing industries. His first game was Shadowbane, one of the first few full 3D MMO in the world. He is currently the co-founder iDreamsky, a mobile game publisher and brand manager focused on Greater China.

Since the joining of Jeff, iDreamsky has successfully transformed from being a smartphone application outsource development studio to being one of the best partners in China for mobile game developers.

iDreamSky president and co-founder Jeff Lyndon has been awarded the first-ever Eastern Trailblazer accolade at the Pocket Gamer Mobile Games Awards in association with Game Insight.

This special award recognises a person from an Eastern country who has achieved considerable success in the region and on a global scale, whether in recent times or throughout their career.

Lyndon had humble beginnings in his working life, starting out as a waiter before managing a cyber cafe as general manager.

Since then he’s had extensive experience in the games industry, starting out in QA and support at En-tranz Entertainment, then working at the likes of Games Bank - which he co-founded, Enlight Software, DuoGeo Entertainment, Phantaxia Entertainment and Interzone Entertainment.

He co-founded Hong Kong’s first iOS games developer Humble Gaming in 2009, where he held the role of COO.

Perhaps his biggest most high-profile success though is co-founding iDreamSky in 2009, which he joined full-time in 2011 as executive VP before being named president of the company.

The publisher has been a key partner with many of the world’s biggest games companies in China, working with the likes of Playrix, Halfbrick, Gameloft, Rovio, Miniclip and many more.

As China has become the games industry’s most lucrative market, so has iDreamSky become one of the most important companies for bridging the Western and Eastern markets.

The company launched an IPO on the Nasdaq in 2014, before later going private and then going public again in Hong Kong in December 2018.

But not just focusing on his own companies, Lyndon has previously worked as co-president of international cooperation for the Global Mobile Game Conference (GMGC) - with the mission of building a better global mobile games ecosystem. It remains one of the biggest B2B games industry events in China, welcoming developers from around the world.

Lyndon’s career is matched by few in the global games industry, making him a worthy winner of the first-ever Eastern Trailblazer award.

You can see a list of all the winners from the Pocket Gamer Mobile Games Awards here.