"The game characters have tampered with the image of historical figures…" 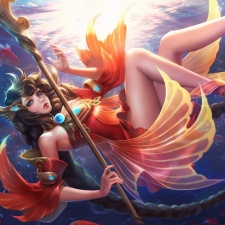 A lawsuit has been filed against Tencent regarding 'inappropriate content' in Honor of Kings.

As reported by Reuters, the Chinese public-interest group - known as Beijing Teenagers Law Aid and Research - allege that certain uses of the popular MOBA are not suitable for minors. The documents were submitted to a Beijing court on June 1st, 2021.

Alongside this, the company believes that Tencent has lowered the recommended age limit for Honor of Kings over time from 18 and over in 2017 to 12 and under over the past few months.

Finally, there is concern surrounding the in-game lottery system and the effects it can have on children of a young age - including inciting addictive behaviours.

It's unclear at this point what specific in-game content that the lawsuit is concerned about, or whether this refers to the majority of characters. Although, a posting on the group's official WeChat account stated that characters sported low-cut clothing and that the historical accuracy of China was being damaged as a result of the title.

"The image design of the game characters is too revealing, and there is a lot of pornographic and vulgar content on the website and community that is not suitable for minors to read," reads the statement.

"The game characters have tampered with the image of historical figures and trampled on the traditional culture of the nation," it added.

Honor of Kings is one of the most successful mobile games in the world with more than 100 million daily active users, according to Tencent.

Age ratings in the country have been debated for a number of years. Only in December last year did the China Audio-Video and Digital Publishing Association (CADPA) introduced a new age-rating system for video games.