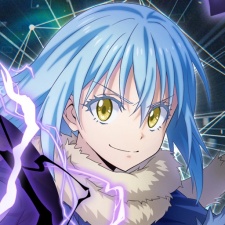 Bandai Namco has revealed that That Time I Got Reincarnated as a Slime: Isekai Memories will debut in the West in 2021.

The game is based on the Japanese light novel series That Time I Got Reincarnated as a Slime that follows a 37-year-old man reincarnating in another world as a common, typically weak JRPG enemy.

The novels have been adapted into multiple manga series and an animated series of the same name that began in 2018 and is currently airing a second season. Isekai is a popular genre of Japanese media themed with reincarnation in a new world, typically a fantasy setting.

Isekai Memories was revealed in March this year and became available for pre-registration in Japan, with an English version announced shortly after.

Isekai Memories will launch free-to-play and include in-app purchases and is expected to be released on November 22nd, 2021 and is now available for pre-registration on iOS and Android devices.

That Time I Got Reincarnated as a Mobile Game

In Isekai Memories, players will be able to follow the story of the first season of the anime and help the main character, Rimuru, build the nation of Tempest. The title will also feature a new game-exclusive story written by the author of the series, known as Fuse.

Players will be able to place buildings, walk around Tempest and battle enemies. The official Japanese voice actors for the anime will reprise their roles and provide the voice acting for the game.

The animated series for That Time I Got Reincarnated as a Slime has remained popular in both Japan and the West since its debut.

Another Bandai Namco title based on a popular anime, Dragon Ball Z: Dokkan Battle, has recently surpassed $3 billion in lifetime revenue since its launch in 2015.