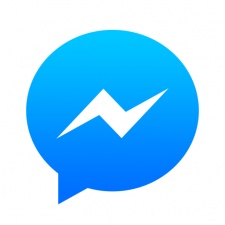 This keeps it behind WhatsApp (itself Facebook-owned), but according to market research outfit Statista, Messenger remains the chat app with the widest global reach.

On scale alone, then, it is highly significant that the app is now home to Instant Games - a series of snack-sized HTML5 games you can play within the app, challenging your Facebook friends to beat your scores.

Its early days for Instant Games, but the move takes on even greater significance when you look at Asia - specifically China and South Korea, where many of the mobile gaming trends now emerging in the West were established - and the relationship there between mobile games and messaging apps.

Turning our attention to South Korea, LINE hit 218.4 million MAUs in April. Reliable numbers for the country's other major player KakaoTalk are harder to come by, but Statista suggests that active users as of Q3 2016 were 49.2 million.

None of these four are doing badly by any stretch, but even China's dominant effort is more than 100 million users shy of Facebook's total.

And yet, by being aggressive, all have had a significant impact on mobile gaming in their respective markets.

LINE, for instance, plays host to some of the world's most successful mobile games. One notable example is Disney Tsum Tsum, which hit $300 million in revenues way back in March 2015.

Every one of the 450+ games promoted by Kakao hit the top 10 downloads on Google Play.

"It couldn’t have done that without LINE’s social network," said Chris Heatherly - then GM of Disney's mobile game efforts - at the time.

No doubt the platform has powered the game to yet further heights since, and it's not an isolated case.

As of 2015, Kakao had partnered with more than 230 developers and promoted 450+ games. Of these, every single one reached the top 10 for downloads on Google Play.

In China, meanwhile, Tencent's ability to keep growing has been widely attributed to the continued strength of WeChat and QQ.

In Novermber, it posted revenues of $1.44 billion for its mobile games business alone.

"A large part of [Tencent's success] is because they have the power of WeChat, which is the largest social platform in China," said Kabam COO Kent Wakeford to alistdaily.

"It’s the power of that channel that can drive consumers into games and drive installs."

So is Facebook Messenger and mobile gaming a match made in heaven that can bring a slice of that success to the west?

Perhaps, in time. But it will be a slow process, and under more complicated circumstances than its Asian counterparts.

The first major point to consider is that WeChat, LINE and KakaoTalk all have very specific audiences.

WeChat is dominant in China. As of August 2015, more than half of LINE's active users were in Japan, Taiwan, Thailand and Indonesia.

And KakaoTalk makes the most of its smaller user base by being ingrained in the South Korean market. In fact, as of May 2016, more than 97% of Korea's smartphone users were actively using the app.

Gaming is just one part of an increasing multi-functionality in Asian chat apps.

Facebook can't rely on its local knowledge to push games that immediately soar up the local charts. Instead, everything it does is global.

Furthermore, Western users are at present more accustomed to a more no-frills chat experience than exists in China and Korea.

Indeed, gaming has just been one part of an increasing push towards multi-functionality in Asian chat apps, with many offering their own integrated payment solutions, food delivery and taxi services, and more.

Facebook Messenger can't yet offer that, and even if it did, it's unlikely that its user base would be ready.

For that, we'd need to become more engaged with our messaging apps and view them as the centre of the entire mobile experience, as seems to be the case in many parts of Asia.

This is precisely why Messenger's HTML5-powered Instant Games are such a shrewd first step.

The games featured on all the aforementioned Asian chat apps require a separate download. The benefits of this are that the games are fully-fledged and can monetise, unlike Messenger's Instant Games which are all completely free at the moment.

However, the biggest challenge facing Facebook right now is simply to increase the amount of time its users are spending in the app to increase its influence in the long-term, and Instant Games should fit the bill perfectly.

The fact they are playable in-app with no download is a real boon, and will hopefully encourage a very wide audience base to take part.

And, if played correctly, it could be one of many steps that see Facebook increase its footprint in mobile gaming and begin to replicate what we've seen in Asia.

The potential can't be overestimated, but it won't happen overnight.

One year on: What is Facebook's strategy with Instant Games for Messenger?