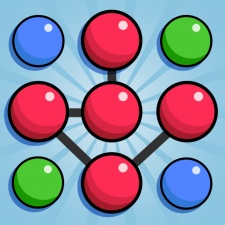 Youssef Gasmi, communications manager, at Voodoo outlines the company's new focus on 'hybrid casual' games and how the publisher worked with Tarboosh games in Dubai to take the original prototype of Collect Em All and turned it into a success.

It’s been an exciting 18-month journey for Voodoo and Collect Em All, with the game reaching #1 in the casual charts in the US multiple times during that period. The well-received title involves players connecting balls of the same colour to destroy them. Creating and then breaking up longer chains means that players gain more points, helping them to climb up the leaderboard.

Collect Em All is an easy-to-control hybrid-casual title that started as an endless version of the basic ball-connecting mechanic in its prototyping stage. In the soft launch phase, a monetisation layer was added along with a leaderboard and eventually a progression system with level objectives. Further casual monetisation features continued to be added, like a piggy bank, level race and an extended in-app purchase (IAP) shop with offer bundles.

The team behind Collect Em All is Tarboosh Games, a Dubai-based hypercasual studio that has turned its expertise to hybrid-casual. Tarboosh Games took over the initial prototype from Madhu. Through its finely-tuned processes and its agile and rapid prototyping capabilities, the team was able to build the core casual features of the game in a fifth of the time it would typically take larger studios.

Madhu was thrilled to share that: “Voodoo converted my failed prototype into a fantastic game through co-production. Collect Em All had nice retention and a fairly high cost per install (CPI), and it was clear that it couldn't be launched as a hypercasual game. It needs much deeper mechanics to achieve high lifetime value (LTV); as a solo developer, it wasn't an option. Through co-production with Tarboosh, Voodoo made this possible. I don't think this would have been possible with any other publisher.

Thanks to Voodoo, especially Vrinda Batra and Corentin Selz, for making Collect Em All a Hybrid-Casual hit game with Tarboosh!”

Collect Em All also marked a shift in focus for us at Voodoo towards how we build and position hybrid-casual compared to hypercasual. We’ve found that if a game is hypercasual at its core it should be allowed to develop in a certain way without the pressure of moulding it into a hybrid-casual game.

With this in mind, we’re trying not to ‘hybridise’ our hypercasual portfolio, but rather develop hybrid-casual games from the outset. We’ve seen from the success of Collect Em All! - especially in retention figures - that this process is more effective and leads to a better final product.

To improve the CPI for Collect Em All, the team created over 500 videos and variations to gameplay to discover what would best drive downloads. We continued by building on all the positive steps we’ve taken in hypercasual development and applying them in new ways for a hybrid-casual audience.

For example, with the marketing of this game, we decided to work in a different way from how we’d usually market a hyper-casual title. We took a typical approach of running a mass market campaign for a broad audience and also ran targeted campaigns for high-value users that are more likely to engage. This cost more initially, but now we're seeing increased ROI further down the line, supporting our decision and new approach.

Due to the success of Collect Em All, Tarboosh Games is expanding its team. In 2023, they will grow to more than 15 people, including game designers, developers, and artists, all fully dedicated to Collect Em All. You can find out more about the opportunities to work on Collect Em All here.

At Voodoo, we’re excited to double down on the success of Collect Em All. Hybrid-casual is Voodoo’s future, and Collect Em All is one of the first of many great games we will release with this new mindset.