Voodoo highlights the company's new 'DNA shift' from hypercasual to hybrid casual, and the impact it's had on the success of Mob Control 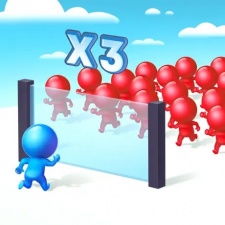 Mob Control is one of Voodoo’s biggest successes in 2022 and we’re really proud of the journey it has taken since its release in the summer of 2021. But what made it stand out for us was that it marked a major shift in the DNA of Voodoo’s games.

The game follows a simple formula; players are tasked with shooting blue enemies through ‘multiplier gates’ that increase the size of their ‘crowd’, which they use to destroy enemy bases. Red enemies deplete the number of units the player has and must be dodged or pushed back.

What sounds simple on paper was actually a big shift for us. It is the first Voodoo game that started life as a hypercasual game, and then evolved into a hybrid casual game. With Mob Control, we took the seed of what makes a great hypercasual title, and scaled it into a game that has a much longer lifespan. This is naturally a big change for a hypercasual company, and it can be extremely daunting to shift your model. It certainly was for us at the time, but careful testing helped us find the right way to reach success.

Mob Control was initially developed by Vincent Bourçois, who leads Voodoo’s Paris hypercasual studio. Vincent was inspired by Voodoo’s 2018 hit game Fire Balls 3D, while following the multiplier gates trend. He and his team spent a full week building the game, before it was launched by Voodoo’s marketing department and reached the top charts. At this stage, Mob Control had become one of the best hypercasual games of 2021. Even though we were very satisfied with it, we had the ambition to bring it to the next level.

Three months after its full launch, another team took over Mob Control. The lean group of just 4 people transformed Mob Control into a hybrid casual hit. Yago Martinez, previously having worked on Bubble Blaster 2048, focused on game design. Gonzalo Garrido took the reins on the development side, alongside Ludovic Dupuis at the helm of the game’s art. The final member of the team, and also the studio head, was Miguel Santirso, who used to be a game lead on Candy Crush Soda Saga at King. They are an extremely senior and talented team with a history of working across a wide range of casual/midcore titles; perfect for the hybrid casual model of Mob Control.

The team took a step-by-step approach to evolving the game, which meant the team reviewed where key improvements were needed following internal testing every 2-4 weeks. Central to this was the day 30 and day 120 retention metrics, far exceeding the usual targets for hypercasual development testing. This has led the team to spend more than nine months of work on Mob Control. Hybrid casual requires significantly longer development periods, but the investment has clearly paid off.

Another major change was the budget required in testing and soft launch, which given the longer lifespan had to be significantly increased compared to a hypercasual title. Over time, the game came together and retention rates increased rapidly thanks to the dedicated work of the team.

To shift from what we know has been an important step for Voodoo’s business model. We are exploring the results of a longer lifetime of our games, both to add value to players but also to increase monetisation opportunities in a natural way.

The simple loop of Mob Control mixed with mid-core elements has allowed us to experiment with how we monetise our titles. Traditionally, Voodoo games have relied on an ad-based system within entirely free to play titles. Mob Control allowed us to shift to a model that splits this between in-app purchases (IAP) and ads, at around 15% and 85% respectively. This wouldn’t have been possible with a simpler title, and relied on the card collection and base building aspects of the game to introduce a new revenue stream and empower players.

A vital addition was the inclusion of many new rewarded video ads. Players can choose to watch a video to earn extra in-game support like revives, currency multipliers, and more. This is a much more engaging and less restrictive approach compared to random full screen videos that risk taking away from the player's control. We’ve found this to be a much more successful approach, one that produces far better results for engagement.

Due to the success of Mob Control, the team behind the game has expanded and grown to over 10 people, including the addition of a data scientist and full QA support. In 2023, the team will grow to around 20 people, fully dedicated to Mob Control. You can find out more about the opportunities to work on Mob Control here.

Mob Control has been an important lesson, and this long-term hybrid casual approach is here to stay at Voodoo. Hybrid casual is Voodoo’s future, and Mob Control is the first of many great games we will release with this new mindset.