The news of the past seven days compressed 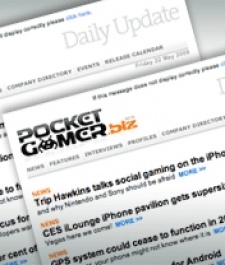 April 9th, 2011 - 11:11am
By Jon Jordan, Contributing Editor
It has been another busy week in the world of PocketGamer.biz; the world of app stores, smartphone platforms, developments in mobile game development and assorted technology.

Despite not yet being available to non-US residents, the Amazon Appstore for Android continues to be one of our areas of interest. We caught up with several companies who had already enthusiastically taken to the new market.

"It's a perfect system to get mobile applications and games to the mass market," HandyGames' CEO Christopher Kassulke, which has already released 16 games, told us.

Namco Bandai and HeroCraft were also keen, while Kyu Lee from Gamevil pointed out that it was another strong piece that was rapidly maturing the overall Android ecosystem.

There were plenty more examples of this. Japanese operator DoCoMo announced it had enabled carrier billing for the Android Market; something likely to be rolled out more widely in the coming months. It's even got the stage where competitors are complaining Google's should be helping their businesses. Witness GetJar's Patrick Mork suggesting that other app stores should be allowed to use the official Android Market IAP technology.

It's not plain sailing for Android developers though. A new survey concluded that 87 percent of them think fragmentation is some sort of issue - ranging from a huge problem to somewhat of a problem. Epic's Tim Sweeney compounded this view saying the company wouldn't be releasing games for Android devices until the experience was more consistent.

The tablet flavour of Android - v3.0 or Honeycomb - was also in the news. Google Andy Rubin went on record to say it wasn't looking to control what companies did with the open source code. The fact the code hadn't been released yet was just that Google was still working on it.

In other Honeycomb news, analysts estimated Motorola's Xoom had only sold 100,000 units, while Acer announced its Iconia tablet would cost £300 and be released on April 20. Rumours suggested Sony is working on a PlayStation certified gaming tablet, while Gamespot's president mused if OEMs don't provide such devices, the retailer would consider commissioning its own design.

There's always something going on in the middleware space, and this week was no exception.

Danish social platform company Agtocore announced it was shuttering its AGON Online servers; all data will be deleted on June 30. Starting up was US company Zipline, which is offering a Lua-based cross-platform technology called Moai. It was suggested Microsoft would extend its Flash-like Silverlight platform to Xbox 360, improving inter operability between its PC, console and mobile devices.

Chinese outfit iDreamsky announced it was working with US outfit Appular to find 82 western games to plug into its 'Game Center for Android' SkyNet platform, which will be embedded on various phones from OEMs such as Lenovo.

There was much excitement this week, when PopCap announced it was setting up 4th & Battery, an indie, edgy games label, to allows its designers freer rein.

Too free it seems, as its first game - Unpleasant Horse - was rejected by Apple for being too mature for the age rating defined. It's since been resubmitted with a higher rating. Still PopCap seems happy that its old standard Bejeweled is doing well on Window Phone 7; at least in terms of the conversion between the free trial and the full paid versions.

Success was also in the air for other publishers. Com2uS' Don Lim was pleased to talk about how Slice It! had done 10 million downloads, 5.5 million of them via the free ad-supported Android version. Similarly, Storm8's Johnny Coghlan reckoned the hundreds of millions of downloads of the company's social freemium games was due to a focus on high quality and a constant flow of new content.

It's hiring too; good news for the developers at Oberon, which announced it's stopped internal game making, preferring to commission titles from third party studios.