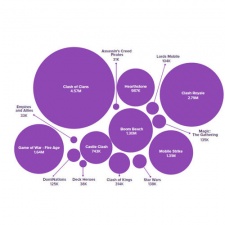 When it comes to predicting the future of mobile games, there appear to be two increasingly stark visions on offer.

The market intelligence folks point to an increasingly rosy global future, with future revenues guaranteed to rise and rise as China pushes the app ecosystem towards $100 billion.

Granulated research, such as the latest user behaviour report on the US mobile market from Verto Analytics, makes for more salutary reading, however.

Part of a longer piece of research entitled Consumer Behavior in 2018: Four Trends to Watch, Verto generated its data from a measurement app installed by a panel of US consumers aged 18 or over.

It then compared current data to that gathered in 2016 to draw its conclusions, which were:

Of course, within those conclusions, there are plenty of sub-trends, most notable of which was the rise and fall of Pokemon Go.

Launched in July 2016, it originally had almost 37 million monthly players, although this has now stabilised at 13.5 million, making it the second most popular game in the US behind Zynga’s Words With Friends, which has over 15 million players.

Microsoft’s Solitaire, Candy Crush Saga and Candy Crush Soda Saga round out the top five, so it’s no surprise that breaking down the market in terms of genres sees match-3, and word and quiz games as the most popular.

Digging deeper into genres, and the power of King in the match-3 sector remains clear.

Most interesting, however, is the battle from the likes of Peak Games (Toy Blast), Jam City (Cookie Jam, Juice Jam) and Playrix (Gardenscapes) to break-out from sub-four million users to higher volumes.

Similarly, when it comes to strategy games - which are the highest monetising sector of those Verto covers - the success of Supercell and MZ as the only companies operating games with more than one million monthly US players is underlined.

What Verto labels ‘Run Games’ is the most competitive sector, however.

Previous leader Subway Surfers has been beaten by Super Mario Run, although Verto records its monthly user base has dropped from 3.5 million at launch to well under two million by April 2017, so it seems likely Subway Surfers has now regained its number one position.

But with five other games (including two Hill Climb Racing titles) with over one million monthly players, and another four over 500,000, this is the genre without a standout winner, and hence the potential for future change.