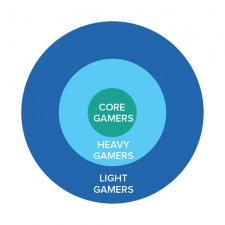 There are an increasing number of companies proporting to offer market intelligence data about the mobile games market.

But as with political polling, there's a large variation in how such data is generated, which leads to even more uncertainly about the accuracy of the results.

When it comes to US company Verto Analytics, however, monitoring consumer behaviour is its core business.

And with clients ranging from Cisco and Yahoo to Microsoft and EA, we'd be surprised if its work couldn't be filed under 'likely accurate'.

Which makes its latest Mobile Games report worth drilling down into.

Based on data from US consumers who have installed a measurement app on their device, it's been looking a some broad behavioural metrics.

First up is the scale of the US mobile games market.

43% of the US population plays mobile games.

In terms of the adults (18 or older), Verto reckons 43% of the US population plays mobile games.

Interestingly, that's less than the number of people who use social networking apps (179 million) or lifestyle and shopping (147 million)

Yet, when ranked by monthly time spend, games' total of 1.2 billion hours per months is second behind social networking's almost 5 billion hours.

Of course, one interesting corollary of this is how it maps to the self-identification of 'gamers'.

38% of the US population plays games but doesn't identify itself as a gamer.

More significantly, 38% play games but don't identify itself as 'gamers'.

In terms of what people are playing, that's easy.

Only Candy Crush Saga and Words With Friends have a 5% reach.

As an aside, this data was collected in May and Verto is apparently working on collecting data that will cover Pokemon GO, although because you can't legally track the sub-18 age group, the full picture of the game's impact is impossible to judge.

Verto also looks at the variation in the behaviour of the people who play games.

It splits this audience into 20% quintile segments.

The two extreme groups are:

How this works out can be clearly seen in the graph below, which ranks 4 games (Words With Friends, Solitaire, Candy Crush Saga and Clash of Clans) in terms of the average session duration and number of sessions per month.

In all 4 cases, Heavy Gamers play at least double the number of monthly sessions, although the increase in session length isn't a proportional.

And for the more complex game - Clash of Clans - Heavy Gamers were playing 3 times the number of monthly sessions - over 300.

There's plenty more data in the report - including weekly download and actively charts and retention graphs.

You can access Leveling Up Your Mobile Game: Using Audience Measurement Data to Boost User Acquisition and Engagement here.