However, the number of Chinese gamers will rise to 115 million by 2026, predicts the market intelligence provider 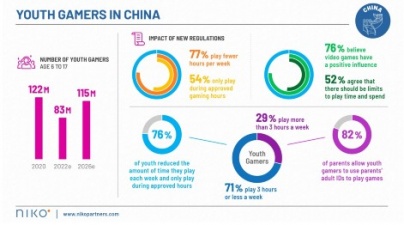 Niko Partners, the Chinese and Southeast Asian market intelligence provider, has released its detailed report showing how the new regulations introduced in China on the gaming industry have affected young gamers.

China implemented new rules on September 1, 2021, stating that gamers under 18 years old will be allowed to play only on Friday, Saturday, Sunday, and legal holidays, for one hour per day between 8 pm and 9 pm.

That's limiting these gamers to only three hours of gaming a week.

Niko goes on to predict that the number of young Chinese gamers will rise to 115 million by 2026, compared to the current 83 million now and 122 million at its peak in 2020.

The National Press and Publication Administration (NPPA), the Chinese government regulator for video games, further restricted the amount of time that young gamers in China could play video games in order to strengthen the nation's anti-addiction regulations.

Despite the clampdowns and curbs on the previously run-away growth, it appears that the games industry in China is not slowing down. China Mobile Games and Entertainment Group Limited (CMGE), a publisher and developer of mobile games in China, has partnered with DreamWorks Animation LLC and Universal Pictures for a special project.