The best of The Big Indie Pitch 2018 - Sticky Pigeons 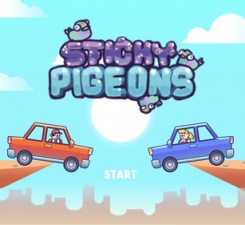 Next up in our retrospective of the global indie tour is a trip to St Petersburg to host The Big Indie Pitch once again as a part of White Nights. This was another new region for The Big Indie Pitch, and as such we saw a range of developers that had never pitched before, making choosing the winner both more difficult, but also more exciting.

Yes you did read that right. In Sticky Pigeons 2 players go head to head, either locally or online, by throwing pigeons at each other's card until one tips and falls over the edge. It's crazy, raw, simple fun at its best, and that's exactly why it won out Big Indie Pitch at White Nights St Petersburg 2018.

Sticky Pigeons impressed the judges and was a worthy winner, and could well be one of the games walking away with a prize at The Big Indie Awards 2018, in association with G-STAR, this November.