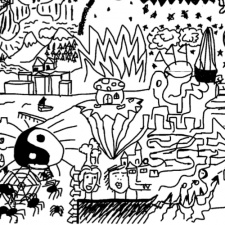 Next up in our retrospective of the global indie tour is our trip to Austrian capital Vienna, as we hosted the very special first ever Big Indie Fest. A show dedicated to all things indie. This pitch saw a swarm of indies present their games to the judges, with one of the most diverse range of games that we've ever seen being displayed. This obviously made it one of the most compeittive pitches, and the winner certainly earned the right to be included in this count down.

The core concept has players drawing whatever they like, based on just a few markings left over at the side of the canvas from another player’s drawing. You’ll have no idea what they’ve drawn until you finish your masterpiece.

The result is often a bizarre “mish-mash” of drawings to create one giant piece of ‘art’.

Mish Mash impressed the judges and was a worthy winner. However, Mish Mash wasn't the only game that drew the judges' praise, and you can read about all of the finalists from The Big Indie Pitch at The Big Indie Fest over here.

Who knows? One of the top three there could be taking away a prize at The Big Indie Awards 2018, in association with G-STAR, this November.

The best of The Big Indie Pitch 2018 - Sticky Pigeons