At the heart of the MENA region 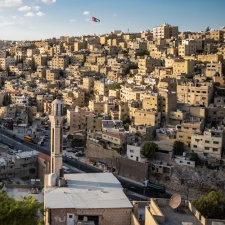 As we explore the potential of MENA as a mobile game market, we take a look at the country hoping to stand as a hub for the region’s game industry.

The games industry in Jordan is well supported by the state, increasingly integrated into the nation's education system, and highly regarded as a legitimate medium and business.

That's a spread of attributes many established and thriving Western game industry hubs have worked for decades to establish.

In fact, the Jordanian game industry itself is no newcomer. With roots that go back to 2003, local developer and publisher Maysalward is a stalwart of Jordan's sector.

Its founder and CEO Nour Khrais was making mobile games with his fledgling studio long before the dawn of the smartphone, and can count himself as a game industry veteran by any global standards.

Today the company still develops games, but also serves as a localisation partner for Western teams hoping to seize the MENA opportunity, publishes its own titles globally, and is devoted to emerging - not just as a leading Jordanian game studio - but as a key player on the international stage.

Opening a UK office has let the team further its effort building bridges between Jordan, MENA and the rest of the world, and it manages seven Gaming Labs that strive to engage young people with careers in games while promoting the potential of further establishing the local industry.

Maysalward is something of a jewel in the crown of the Jordanian game industry; but it isn't alone in being wildly ambitious.

And it built its success on the efforts of another band of creatives and technologists that laid the foundations for what was to come.

Universities in Jordan take the creative industries seriously today, and lot of activities related to building a strong creative generation are conducted.

"We have a very strong IT scene in Jordan, and our creative industry started earlier through animation companies and mobile content providers," explains Khrais.

"Universities in Jordan take the creative industries seriously today, and lot of activities related to building a strong creative generation are conducted, even at a grassroots level; like the App Challenge that targets students from the age of 14-to-16.

Jordan is a relatively small country with a population of just 10.5 million. It is dwarfed - geographically, at least - by neighbours like Egypt and Saudi Arabia.

Data relating or relevant to Jordan's game industry is rather hard to confirm, however. There are certainly dozens of local studios, and potentially many more. Khrais has counted 10,000 members across the Gaming Lab projects.

Recent smartphone penetration figures are difficult to quantify, but in 2016 it was estimated at 51 per cent. That may sound low, but the devices are often shared by family members.

In 2017, 81 per cent of the population were counted as 'mobile internet' users, and more recently it was asserted that close to 90 per cent of Jordanian households have a smartphone.

Statista data from 2017 suggests Jordanian smartphone penetration hitting 83 per cent, but is unclear if that reflects device ownership or access. Either way, the numbers are considerable.

Regardless, Jordan's internal market is ultimately limited by population.

But that might be a considerable strength. Jordan's game developers have necessarily collectively set their sights beyond their own national borders, and are keenly collaborative in an effort to establish Jordan as MENA's hub for the games industry.

As well as the aforementioned Gaming Labs, the Jordan Gaming Task Force pools the collective resource of numerous gaming companies in an effort to establish Jordan as the game development capital of MENA its entirety.

"Jordan has been the hub for startups in the region for a long time," enthuses Hussam Hammo, CEO of Tamatem, a Jordanian mobile game publisher that serves the entire MENA area.

He argues the most successful startups and exits initially came from Jordan or by Jordanians. This allowed multiple venture capital firms, incubators and accelerators to start investing in Jordanian startups.

"With the establishment of the Gaming Lab, there was a clear direction that Jordan has a focus on games, and that lead to many companies and indie studios to produce very successful titles coming from local talents targeting the region and the globe," Hammo says.

So there's a bounty of reasons to be optimistic about Jordan's rising capacity to serve as MENA's main hub, but that doesn't mean it is a sector free from challenges.

"I believe there are a few challenges facing local developers," confirms Hammo.

Our developers needs more exposure towards UI/UX and quality games that can reach users beyond the region.

"First, focusing on the local or regional markets with hypercasual games - which might be the easiest form of games to develop - yields very low income to the developers who are dependant on ads as a way of monetisation. The ads pay-out is still small in the region.

"Second, the talent pool might be limited, but with more people learning Unity and other gaming engines, I can easily say that a wave of game developers is coming soon to rock the scene. If Jordanian developers focus on the international markets, I think they will have a good opportunity of succeeding."

Khrais is clear local developers need to expand their ambitions if they are to make the most of the opportunity.

"I think our developers needs more exposure towards UI/UX and quality games that can reach users beyond the region," he argues.

"The limited exposure regionally is not helping the Jordanian Developers to accelerate their growth.

"I think this is one reason The Gaming Summit in Jordan partnered with Pocket Gamer Connects to take over the yearly game summit and bridge it with an international scene and bring more exposure to Jordanian game developers and the region."