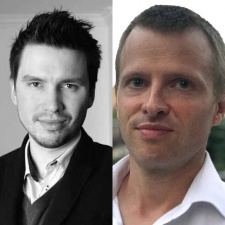 This week, we spoke to Born2Play founder Stan Mettra and programmer Denis Hiezely on the formation of the studio, partnering with publisher Supersonic Studios, and the launch of Stacky Dash.

Stan Mettra: My journey began in the console game industry where I worked for close to 20 years at Ubisoft Paris and Ubisoft Shanghai. I started in character animation and then evolved towards design and direction, mostly for console games. At some point, I wanted to make games that everyone would play and when I got the chance to work for Ubisoft’s mobile team I took it.

After four years, despite many good moments at Ubisoft, I decided to leave and go solo. It was a tough and risky choice, but I really wanted to give it a shot. I learned coding, which was the one job that terrified me before, and though I’m still a junior coder at least it’s not a black box for me anymore. After I released a few games, Denis joined me on this adventure, which has allowed me to progress faster and explore more concepts.

The biggest challenge is acknowledging that success is the exception and failure is the norm.

Denis Hiezely: I started to learn to code 10 years ago. At first, I made a few prototypes of learning/teaching apps and then I focused on games because it’s way more fun. I met Stan in 2017 and we started to work together more and more since then.

Stan Mettra: Despite being my own boss, I have pretty fixed working hours so that it fits into our family’s schedule. For the work itself, I constantly juggle different tasks related to game development.

I’m the content guy (art, design) while Denis is the code guy - he fries his brain and I do all the rest. It’s exciting to get to do such varied tasks yet to an outsider it would all look the same: just a guy working on his computer for most of the day.

Denis Hiezely: I’m not a full-time indie developer, with a day job as a librarian in a school. I code during my lunch break, on the bus, and sometimes at night. I have a lot of holiday days, and that’s when I focus the most on coding.

Stan Mettra: The biggest challenge is acknowledging that success is the exception and failure is the norm. Adopting the proper workflow and priorities, and becoming efficient with all the steps in an app’s creation and publishing is also a challenge.

Denis Hiezely: Managing my family time because my wife felt I was wasting my time with coding. With the success of Stacky Dash, she’s now changed her mind!

Stan Mettra: When we make a free hypercasual game we try to entertain the widest possible audience. So the success is (unsurprisingly) when our game is exciting and accessible enough for millions of people.

If it proves its viability through user testing, so that a publisher can step in with their marketing and operation expertise and make sure it gets discovered by the massive audience it rightfully deserves, then for me, it’s a success.

Stan Mettra: It’s a fascinating market because there are so many different ways to approach it. You could go for very innovative premium gameplay concepts, go full-on with the art to create more visual or atmospheric games or go mainstream with free-to-play games.

The market is also a bit dazzling because it can easily give the illusion that anyone can succeed. Ultimately, no matter how motivated and excited you are by the app or game you’re making, your UA strategy is as important as the app itself.

Could you tell us about your latest game, and why it felt right for mobile?

Denis Hiezely: Stacky Dash is a simple mix of swipe (the most enjoyable touching gesture on mobile), stacking things (which everyone enjoys) and a touch of an easy puzzle game. On mobile, there’s no need to make things complicated.

Stan Mettra: Stacky Dash was one of many games we created this year - it just clicked better with the audience than our other ones. During the first usability tests (with users physically present), we saw that they found it enjoyable within the first few seconds which is crucial for a hypercasual game, and it was very exciting for us to see. Sadly that hadn’t been the case for all the games we created.

We were also the number one most downloaded game on TikTok in December, one of the top advertisers on Facebook, and now see over 100,000 downloads a day.

How important is the TikTok platform to the studio?

Stan Mettra: Our publisher Supersonic Studios utilised TikTok to push the game in its early days. It seems that helped to put Stacky Dash on a good track to become the hit it is today. It also helped us to gain traction among the female audience, which is now quite larger than our male audience.

Stan Mettra: This is a slightly unusual story since our game was previously published, however during that first launch period the CPI rose prohibitively high, preventing us from scaling. We tested quite a few changes without success and almost gave up on the game, but then decided to try with another publisher - Supersonic Studios - that thought the game had potential.

Denis Hiezely: Since the soft launch testing phase was technically already over (as the game had already been published), we had to make gradual and subtle changes to the game in order to keep momentum while still improving the KPIs. During this, we did a few efficient and well-targeted gameplay and visual tweaks, which increased day one retention from 36 per cent to 39 per cent and day seven retention from 10 per cent to 14 per cent.

On the CPI side, Supersonic did immense work: testing over 200 videos, interactive end cards and playables. This reduced our CPI on Facebook significantly from $0.40 to $0.25 and cracked an IPM of 47 on SDK networks. The rest is history - Stacky Dash exploded in the charts, reaching the top five in 28 countries.

We were also the number one most downloaded game on TikTok in December, one of the top advertisers on Facebook, and now see over 100,000 downloads a day. For a game that we nearly gave up on since it wasn’t hitting its KPIs, this is an extra exciting win for us.

Stan Mettra: For a tiny studio like ours, it didn’t change anything because I was always working from home. Plus, we’re based in China where the pandemic was (and is still) very much under control.

The main restriction is that it’s very complicated to travel. It does not impact our work but does affect our personal lives. Many of my relatives are abroad and we could not meet with them for such a long time.

Stan Mettra: Right now we’re working on expanding Stacky Dash to its full potential with a couple of big updates planned. Working on hypercasual games has taught me to never plan too far ahead because there are too many elements we cannot predict.

We prefer to develop several games and ideas in parallel, based on inspiration and in reaction to user testing. I guess you could say that my current plan is to work on a bigger plan and a long-term vision that suits this fast-paced market.

Stan Mettra: Having an unlimited budget would mean I could focus on making games with more original themes that appeal to a smaller audience, like creepy horror games, mind-bending puzzles, or doing serious games that help you learn a good habit.

Denis Hiezely: I would love to make a game that can really change or improve people’s life. A psychological self-improvement game…but a fun one!

Stan Mettra: If you have a steady job and are considering going solo, my advice would be to manage the risks, so that trying the indie route will not endanger your whole career or life too much. It’s also reassuring to have a realistic backup plan so that you don’t end up too down or unmotivated if your project fails.

Denis Hiezely: Be like water because the market is a big rock. Learn gymnastics because you will need to be flexible. Prototypes need to be plug-and-play and drag-and-drop. Don’t reinvent the wheel, play with it.