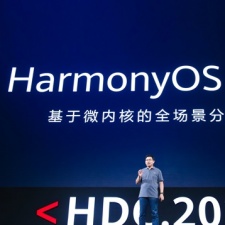 The company said the first use-cases for the brand new OS will be smartwatches, smart screens, in-vehicle systems and smart speakers. The first smart TVs using HarmonyOS are due to launch later this year.

However the company is likely to bring the OS to smartphones eventually. Huawei consumer business group CEO Richard Yu said HarmonyOS is “completely different” from Android and iOS, and is a “microkernel-based, distributed OS that delivers a smooth experience across all scenarios”.

He added that developers will be able to make their apps once and then deploy them across devices.

HarmonyOS will first roll out in the Chinese market before launching worldwide. The operating system will be released as an open-source platform, much like Google does for Android.

“To support this, we felt it was important to have an operating system with improved cross-platform capabilities. We needed an OS that supports all scenarios, that can be used across a broad range of devices and platforms, and that can meet consumer demand for low latency and strong security."

News that Huawei would develop its own operating for smartphones was expected following trade restrictions placed on the firm by the US this year amidst the country’s trade war with China.

The company found itself on the US’s ‘entity list’, which means Huawei must gain government approval to do business with US firms. As a result, Google blocked the smartphone manufacturer from some Android updates and apps.

Should the ban stay in place, it’s unlikely the new version of Android will be made available to Huawei products when it launches later this year.

The US’s ban and Huawei’s announcement has the potential to have a significant impact on the global mobile market. Currently in the West, the sector is dominated by Apple’s iOS and Google’s Android.

However, IDC reported earlier this year that Huawei is the world’s second-largest smartphone vendor. It had year-on-year growth of 50.3 per cent in Q1 2019, selling 59.1 million units and gaining a 19 per cent market share - putting it “within striking distance” of leader Samsung.

Huawei's move to its own OS could have legs, but there are major challenges it will still need to overcome, however. Without the Google Play store, it will need to convince developers to port their games to another operating system.

It will also need to ensure its own marketplace will have a library that rivals that of the App Store and Google Play, issues that have previously affected other operating systems such as Blackberry.

But given tensions between the US and China and Google's ban on Huawei devices, the firm will be hoping a new operating system could become an attractive proposition for both developers and other smartphone manufacturers.