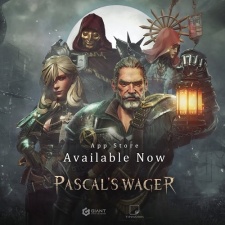 Yang Yang is the founder of TipsWorks and producer of Pascal's Wager.

This week we spoke with TipsWorks founder and Pascal’s Wager producer Yang Yang about the game's development and the influences that helped make the title what it is.

PocketGamer.biz: Can you start off by telling us about Pascal's Wager?

Yang Yang: I think one of the biggest things to know first about Pascal's Wager is that the game was built entirely around a console mentality. We did this because we wanted something new to the mobile games industry, something that changed the way people think about mobile games. It's definitely a risky proposition, but I think it's worth a try for both mobile and console gamers to be honest.

I think one of the biggest things to know first about Pascal’s Wager is that the game was built entirely around a console mentality.

That being said, Pascal's Wager is centred around rich game elements, high production quality, and performance which is very important when playing a game like this. At the same time, this is indeed a very difficult game in which you need to focus, gauge your foes and act accordingly.

In the beginning, we felt a little helpless (maybe a bit hopeless as well) as we thought through whether we wanted to make a traditional game in the sense, so we'd need a large investment and even more so when you think about marketing a game.

With that in mind, we thought it would be better to just make something we'd like to do, which started out with us doing some sketches and deciding a style. Initially, we designed Pascal's Wager as a multiplayer game that allowed players to choose between several different characters during each scene, pretty much like Nintendo's Super Smash Bros.

But over time we found that more and more people who liked our design wanted it to be more story-driven, like that you would find in an ARPG game. We talked about this and decided to take the risk and go in this direction as it was what players were wanting, which was crazy as we only had around a dozen or so developers at the time! That's also why there are so many protagonists in the game today as we designed a fair amount of characters originally.

It took us about half a year for the technical preparation aspect of the game and then took another two and a half years to further develop. TipsWorks Studio started with just a dozen developers and has since then grown to around 30 now.

I think the answer to this lies in two aspects here. On one hand, from a technology standpoint, we faced many unprecedented challenges, such as very intricate and large three-dimensional scenes, camera processing, the touch screen operation mode, cut-scene animation performances, etcetera.

All of which is rarely ever done in mobile games which made early development time a period to learn and explore, so we could figure all that out and what scale could be feasibly done.

The other aspect was addressing and facing our doubts about marketing this, as no one was doing a game of this scale on mobile. We had to convince and drive ourselves over the long course of the development to keep going.

Until just about two months before release is when we really put all the elements of the game together.

Until just about two months before release is when we really put all the elements of the game together. We made a version and invited fans who had been following us to check it out for a full day of in-depth playthroughs which allowed us to really get some great feedback, which was all great.

Our community really came alive as players were constantly chatting about their experiences in the game, comparing it with others, and just really excited about it.

How much inspiration did Pascal's Wager take from the Souls series?

Well, our entire development team are huge fans of the Souls series as we just love the atmosphere, the level design and the sheer sense of accomplishment behind beating a challenging foe, which is what we wanted to recreate for players on mobile.

We are also very experienced with all the major action games such as Devil May Cry, Monster Hunter, God of War, The Witcher 3 and so on. There are so many elements in these games we can learn from.

Well, we are very encouraged as the feedback from players has vastly excessed our expectations. People have let us know that they are so appreciative of us for making a game like this, having it available on mobile and helping change the view of what should be on there.

In addition to this, we also have a few regrets around the release with some of the minor issues but also some of the great things we wanted to add but were too late to put into the game. The game will be improved during future updates and with DLC.

Pascal's Wager is not really driven from the traditional sense of live ops. For our future plans, we plan to keep making improvements and updating the game for the entire year of 2020, which includes things like new game plus and extreme challenges for players to enjoy.

You'll notice in Pascal's Wager there are a lot of dark fog-covered areas that are not fully open just yet, but will be made accessible later on, allowing you to experience a whole new world of adventure.

We also plan to release DLC which contains new stories and characters which will add to the depth of the world for players. I also want to reveal that the game might have a surprising ending!

First and foremost for us is the importance of focusing on Pascal's Wager, but at the same time, we've been talking about the next project. This experience has given us the capacity to be able to deliver high-quality content which has given us a high standard to follow moving forward.

I want to emphasise that with the launch of Pascal's Wager, we've had amazing results and learned a lot on the technology side of things. I think this will give us more confidence for the future.