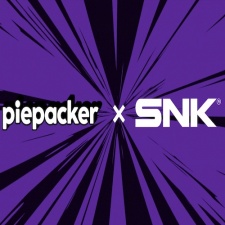 Cloud-based social games platform Piepacker has revealed a partnership with Japanese game publisher SNK to bring the latter’s retro games to the service.

Through the partnership, SNK will bring 10 of its most popular games from the NEOGEO generation to Piepacker’s catalogue of retro games.

Last week, Sengoku 3 was brought to the platform, with six new titles added yesterday, and a further three to be added later in March.

Last October, Piepacker raised $12 million to expand its platform to mobile devices, as well as to more territories worldwide.

SNK Corporation CEO Kenji Mastubara added: "It is exciting and pleasing to partner with Piepacker. I am happy to see SNK classics return. Piepacker is a young and passionate platform with a lot of potential. Hope Piepacker players will enjoy the games and have fun!"

Last month, cloud gaming platform Anstream Arcade revealed that it saw a 3,200 per cent increase in players in 2021, bringing its total daily player count to 200,000.